The JDCC Warhawks team bounced back against Pensacola Christian after being down 20-7 to win its first game of the season 81-70 last Thursday.

The Warhawks were led in points by team newcomer C.J. Perry, who dropped 26 points on 10-of-16 shooting from the field.

Head coach Allen Gainer said he was pleased to see his team fight back into the game after being down 20-7 at the start. 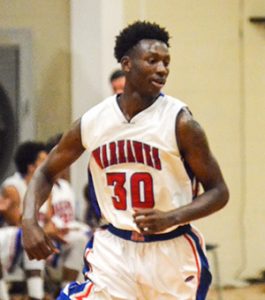 Corey Williams | The Brewton Standard
JDCC’s CJ Perry heads back down court after hitting a three-pointer in the second half. Perry finished with 26 points.

“(Pensacola Christian) is a very well coached team,” Gainer said. “We are trying to be a much more up tempo team this year than in year’s past, and we were very successful in the transition against PCC.

“I was disappointed with our defensive effort, as we allowed PCC to get into the paint too frequently. We must get better at keeping teams out of the lane as we approach our conference play. In addition, offensively we must value each possession more and cut down on our turnovers.”

JDCC outscored Pensacola Christian 39-34 in the first half, and 42-36 in the second half.

Tez Brooks had a big game for the Warhawks with 20 points, four rebounds and three assists; as well as five steals on the defensive end.

The win was the first for the Warhawks since Feb. 12, 2015 in an overtime win against Faulkner State. The team finished 0-23 last season. They are 1-1 this season.