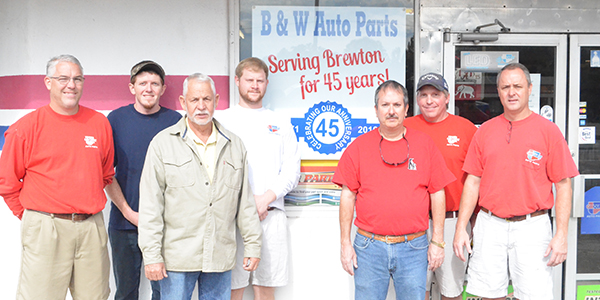 On Thurs. Nov. 10, 2016, B&W Auto Parts celebrated its 45th year in business. The milestone year falls on owner Jack White humbly, who began the business with his business partner Mike Burnham out of entrepreneurial ambitions.

“We just tried to better ourselves at the time,” White said. “My daddy always told me if you can make money for somebody else, you could always make it for yourself.”

White started as a Napa dealer in 1963, then moved on to a couple more auto parts stores before partnering with Mike Burnham in 1971.

“We were working together when at that time we decided to go into business for ourselves,” White said.

Out of the effort B & W– Burnham and White– Auto Parts was born.

The business started on Mildred Street, near the intersection of Highway 31 and Highway 41 on the property now home to one of the city fountains.

It moved to its current location at 430 South Boulevard in 1980.

White bought out Burnham in 1985 to become the sole owner of B&W Auto Parts. Still, the name on the front of the store has remained the same all these years.

“Steve is the true boss though,” Greg White said with a smile.

With the trio working in unison, the business has been able to adapt to the ever changing times, especially with the advancement in technology.

“The business has changed a lot over the years,” Steve White said. “The parts we have in stock for cars now, back then was about half in inventory just to cover as many cars. It’s a whole lot more complicated than it used to be as far as how cars operate and how technology has grown in 45 years. Keeping up with the technology is a challenge.”

No matter the sign of the times, the Whites agree that its customer service that reigns supreme.

“Taking care of the customer is important. We can’t ask for better customers,” the elder White said.

Steve White said he’s always been involved with the store even at the young age of six when he was sweeping the floors and cleaning shelves; or even at a later age on break from college to help with other duties needed done around the shop.

“I’ve been involved one way or another and it’s been great,” he said. “I’ve met a lot of good people. We’ve got a lot of people who have come in here for years and years.”

B&W Auto Parts was named the 2016 Best-of-the-Best in Auto Part sales as voted by the community. That makes back-to-back years B&W Auto Parts has accomplished the feat. With that being said, there’s little to wonder why the shop has been holding its own for over four decades.