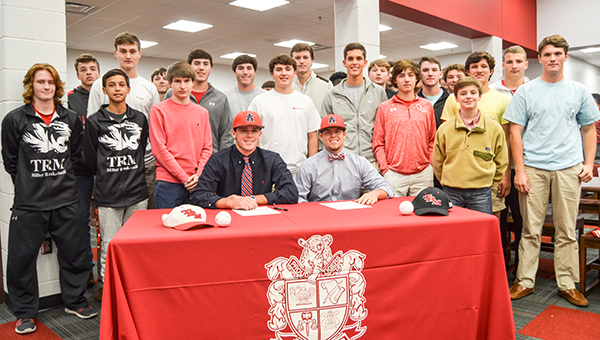 Sometimes the best of friends can get lucky. They get the chance to play with their best bud on the same team in coaches’ pitch, Little League, and maybe even high school at a later age. Not so often do you get to play with your best friend in college. but that will be the case for T.R. Miller seniors Hunter Brittain and Jo Jo Booker after both officially signed the dotted line to play baseball for the South Alabama Jaguars last Wednesday.

Both Brittain and Booker agreed, the opportunity to play college ball together will be exciting.

“I would’ve never have dreamed of playing college baseball with my best friend. So it’ll be awesome,” Brittain said.

“It’s going to be real cool,” Booker said. “We’ve been playing together for most of our lives. I always liked playing with him. He’s a catcher, which makes it that much better. He’ll probably get to catch me when I pitch. That’ll help out a lot.”

Booker verbally committed to South Alabama as a sophomore back in 2015.

“South Alabama was the first school that offered me a chance to play baseball, so that means a lot,” Booker said. “I like the campus. The pitching staff is one of the best. I like the baseball facility. They have a nice field. I went on a visit a few weekends ago and met the team. The guys were cool. There was nothing I didn’t like about South Alabama.”

Booker said the coaching staff is looking to use him as a starting pitcher, but he could possibly see time in the outfield as well.

It’s his pitching Booker said he looks to improve for the future.

“I want to improve on my velocity and having command on the mound,” he said. “It’s important to stay calm and not lose your composure.”

Booker said he has a lot of people to thank for getting him to this point.

“I definitely want to thank my Mom and Dad,” he said. “I know all the money it takes to play travel ball. That’s really how I got noticed was through travel ball. I’d like to thank God. He gave me the ability to do this. He’s the only reason I’m able to do this.

Parents Joey and Christina Booker said they are proud of their son’s hard work.

“It’s been a pretty good ride,” said Mr. Booker. “I always tried to push him above and beyond in not just athletics but in school also. I pushed him, but he always pushed himself to be better and to learn from mistakes.”

“It’s an answer to our prayers,” Mrs. Booker said. “We’re really excited he’s going to South Alabama. That’s my alma mater. My daughter graduated there last December so it seems to be a family thing.”

Booker said he is interested in studying biology in college.

Brittain verbally committed to play baseball in February this year.

“I fell in love with the coaching staff, place and how close it is to home,” Brittain said.

Brittain added that he sees himself being a good fit with the Jaguars.

“I see myself fitting in good, if I work hard and continue to do the same things I’ve been doing my whole life,” he said. “If you get up there and slack off it’s not going to be a good fit for anybody. If I do what I’m supposed to do by putting in the work, everything will take care of itself.”

It is his hitting Brittain looks to improve for the future.

“I believe hitting is what takes you far in the game,” he said. “ If I can improve on that it’ll be something to look forward to and do longer.”

Brittain said he doesn’t take the opportunity to play college ball for granted.

“I’d like to thank God first of all. Also my family and every single coach I’ve had. My friends. Mr. Snell. Really, everybody that has been involved.”

Brittain is the son of Wesley and Kim Brittain, who were both in attendance for their son’s big moment Wednesday.

“He was one of those kids that wanted to stay in the batting cage every day,” Mr. Brittain said. “The last three years have been a world wind, having to want to play college baseball. With that being said, we’ve spent a lot of time on the road and long nights in hotel rooms. It all paid off in the end because the right people saw him and liked him. It’s been a great ride. But none of this would have been possible without all the friends, teammates and coaches that has helped him along the way.”

“You couldn’t have scripted this any better- to play for the University of South Alabama, somewhere he wanted to go; playing close to home, and getting to play with his best friend. We know this is a blessing from God. I know he doesn’t take this opportunity for granted.”

Brittain said he is planning on studying exercise science at South Alabama.

Former TRM head baseball coach Jim Hart said he has no doubt both men will do fine at the next level.

TRM baseball coach Kevin Madden said both are exceptional leaders on the field and will make a good transition to the next level.

“JoJo has a great work ethic,” Madden said. “He has a great mindset on the mound and he has a good arm. If he continues to work like he has, he’ll be successful at the next level.

“Hunter brings some energy to the field,” Madden continued. “Like JoJo, he brings leadership to a team. It’s an important skill-set to be a field general at catcher, and that’s what Hunter brings to a defense. He also has good work ethic.

“Between both of them South Alabama is getting two quality players as well as two quality young men.”