Eagles basketball gets ready for opener 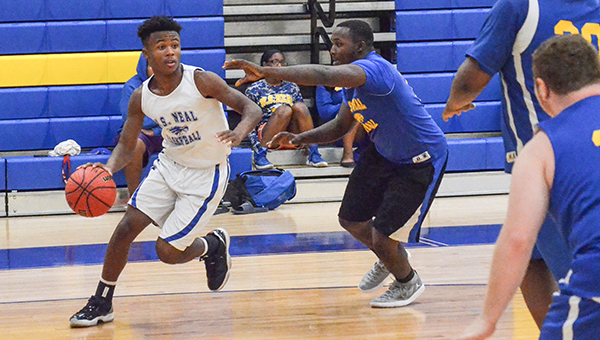 Corey Williams | The Brewton Standard
Marvin Maddox drives to the basket during practice.

The W.S. Neal basketball team will begin its season Thurs., Nov. 17, at home versus Flomaton.

Though the Eagles will see nine returning seniors this season, the team returns no starters from a year ago.

Head coach Dewan Salter said the team doesn’t have the height it had last season, but is strong across the board speed-wise.

“Our size is in question but we’ll give team’s fits with our speed,” Salter said.” The biggest thing is getting everyone on the same page as far as what we’re trying to do on offense and defense. It’s a process which will take a game or two.”

Salter said he’s looking at a starting lineup of Walker and Hawthorne at the guard positions; Thomas and Maddox at the forward positions; and Gantt at center.

“We’re looking for leadership out of Kenny [Walker] and Jacobey [Hawthorne]. They’ll be two of our ball handlers.”

Thomas is a newcomer to the team.

“(Thomas) shoots the ball extremely well from the outside,” Salter said. “He has good size at about 6’ 3”. He’s a good athlete. He lacks experience but we’re looking for good things out of him.”

Salter said Maddox was impressive on both sides of the ball in a team scrimmage.

“Marvin (Maddox) is an athlete,” Salter said. “He’s fast, he can handle the ball and he can rebound. He’s going to be a key contributor to the team.”

Gantt was a member of the team last year, but missed the entire season due to an injury.

“(Gantt) is going to be a major contributor inside for us,” Salter said.

Josh McMillan and Ricky Samuel will look to be the big men rotating at the center position.

DeRon Samuel and Lonnie Richardson will see time as ball handlers for the Eagles.

Salter said he will run a second unit as well this season.

“The second group was a key for us last season,” he said. “They were a game changer and gave us energy at times when we needed it. I look to use that unit again.”

The Eagles may be facing an even tougher region this season.

Monroe County will return to strength this season and will be the team to beat in the area.

The Tigers finished last season 26-6 overall and 6-1 in the region. The team will be led by all-state player from a season ago, junior Tyler Stallworth.

“It’s a lot tougher region than we’ve had in the past,” Salter said.

“We don’t know too much about Andalusia, but they’ll come ready to play. They have some athletes. Escambia County has a new coach this season. Monroe County is going to be the team to beat. They have a lot of size and some good ball players.”

Salter is entering his third year as the Eagles’ head coach. The Eagles had its best season under Salter last season finishing 21-8 overall and 5-0 in the region. The Eagles advanced to the sub-regionals before falling to Thomasville in a down-to-the-wire game.