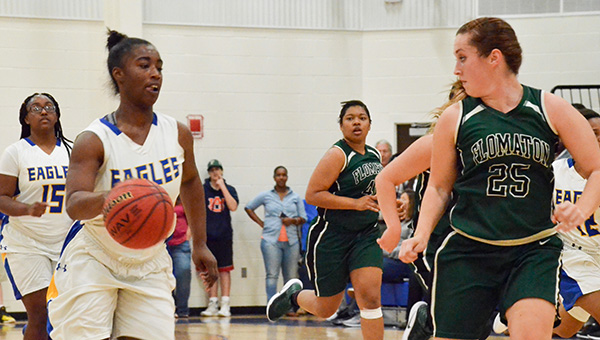 W.S. Neal Eagle’s basketball teams tipped off its season Thursday versus Flomaton. The JV and girls’ varsity team picked up wins, while the boys’ varsity suffered a loss.

It took overtime to decide a victor in the game. In the fourth quarter Flomaton found itself trailing 36-34, before guard (No.2) drove to the basket for a made layup and foul. No. 2 made the free throw to give Flomaton a 37-36 lead.

Taylor Fountain made a free throw down the stretch to tie the game. Neal’s Jordan Hails would miss the go-ahead lay-up on a fastbreak to win the game. Hails redeemed himself completing a 3-point play in overtime take the lead. Flomaton answered with a 3-pointer on the other end. Both teams traded baskets again to tie the game 42-42. Neal closed out the game on buckets by Dylan Ingram, Fountain and a free throw by Ingram.

Fountain led the team with 13 points. Neal missed 21 free throws in the game.

The game was tightly contested with Neal lead at halftime 20-16. In the third quarter the Lady Eagles distance itself from Flomaton with a big quarter by Marishia Fraser who scored 9 points. Neal outscored Flomaton 14-2 in the quarter. Flomaton made a run in the fourth on the combined efforts of No. 40 and No. 24, but in the end fell short with Frazier hitting a free throw in the final minute to seal the game.

Fraser led the team with 19 points. Shantavia Autrey had 8 points.

Neal took an early lead into the second quarter after a good first quarter by senior guard Kenneth Walker who scored seven of Neal’s nine points. Flomaton rebounded in the second quarter for a 19-11 run to lead at halftime 26-20.

For the rest of the game Flomaton took advantage of some Neal miscues on offense, which made it hard for Neal to regain ground back in the game.

Jacobey Hawthorne led Neal with 15 points. Marvin Maddox had 10 points, 8 rebounds and a steal. Walker finished with 7 points and an assist.