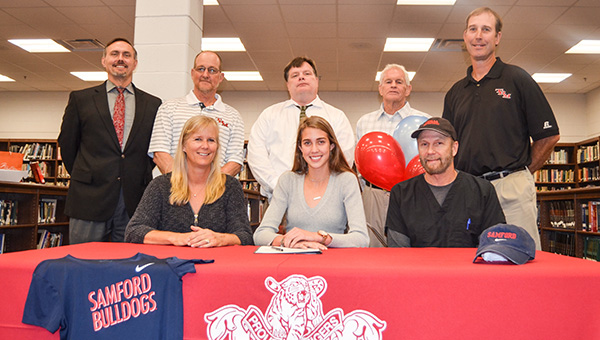 T.R. Miller senior Allie Nelson solidified another monumental victory last week as the star-athlete signed her letter of intent to run cross-country and track for the Samford Bulldogs next year. The signing comes off the heels of Nelson’s individual state title run.

The decision to sign with Samford University was not an easy one, according to Nelson, who also had offers from Montevallo and the University of Alabama-Birmingham to name a few.

“It was a really difficult decision,” Nelson said.

“Samford has been on my radar for the past three years. In the end I really had to think about what school is going to challenge me and I felt Samford will, both academically and athletically.”

As a junior, Nelson won individual state titles in track for the 1600 meter, 3200 meter and 800 meter. In cross country she finished second overall at state.

Samford is an NCAA Division I college housed in the Southern Conference (SoCon). The women’s’ cross country and track team have done well in recent years. Nelson’s older sister, Karisa, has been part of each team’s success.

Assistant cross country coach Alan Ash said Nelson has worked extremely hard over the years to become the runner she is today.

“I remember when she would run with me some when she was in the fourth grade, and she said I’m not running that far!” humored Ash.

“She has gotten more mature with her running as the years have moved along. Her work ethic has gotten a lot stronger. Academically, I thought Samford was one of her best choices. I thought pushing her to be Division I would be a challenge for her, and I’m proud to see her accept that challenge.”

Volunteer helper with cross country Billy Bryant said its Nelson’s good attitude that has done wonders for her and the cross country team this year.

“Allie has always set a good example for her teammates,” Bryant said. “She’s been a spark for the girls and boys. Overall the whole team has grown to be a team. That’s really good and Allie has been a big part of that. She’s been a blessing for the program.”

Nelson’s parents, Dr. Scott and Pauline Nelson, said their daughter has worked hard over the years, and they are very proud and excited for her.

“I’m proud of her for challenging herself,” said Dr. Nelson. “She had a hard time with several great offers. I think she had the hardest time of all are kids to make a decision because there are so many great programs and places to go to. It was tough. All the coaches have been fantastic. They’ve been great inspiration, and her team has been as well. The community has also been very supportive.”

“She’s worked hard for this opportunity,” said Mrs. Nelson. “She deserves it. We thank her coaches Rob Atkinson, Coach Ash, Mr. Billy and Coach Eddie Brundidge. They’ve kept her going since seventh grade. Without their coaching, who knows where she would be today.”

She plans to study biochemistry at Samford.