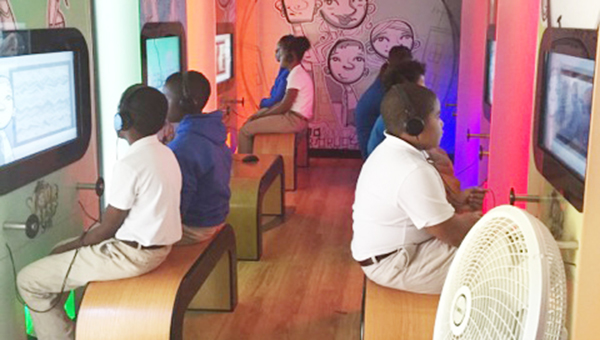 Nicole Burns | The Brewton Standard
This high tech bus gives students an interactive way to learn the dangers of illegal drug use and how it could affect their bodies.

“It’s ugly, it’s scary, and that’s gross!” Those sound like typical responses from fourth and fifth grade students, but this time they’re not talking about a game, TV show, or lunchtime story. They’re talking about what the illegal use of prescription drugs and narcotics.

“Gross probably tops the list of responses, but we get a lot of good questions from students wanting to know what it’s all about,” said Seldon Bird, Drug Education Coordinator of the Mobile Infirmary Health. Bird recently got to know local 4th and 5th grade students at W.S. Neal Elementary School when he brought the DeBakey Foundation Drug Bus to campus.

This high tech bus gives students an interactive way to learn the dangers of illegal drug use and how it could affect their bodies. “We have a two part program,” said Bird. “Part one, we watch a video that’s about 12 minutes long that talks about the gateway drugs: alcohol, tobacco, marijuana. It lets the students know what the dangers are and what it can do to their body. Part two, they’re using touchscreen computers on the back of our vehicle. It’s about a 20-25 minute program and it talks about the other drugs: heroin, cocaine, LSD, meth, prescription drugs, steroids, and party drugs. It lets them see what can happen to their bodies if they decide to use these drugs.”

The material is purposely graphic and tells the realistic story of how some drugs can deteriorate your health. “In this day and time, students are being exposed to illegal use of drugs,” said W.S. Neal Elementary Principal, Eric Andrews. “They see so much. Sometimes they see their parents or guardians or relatives or friends involved in it and they need to know that that’s not a good thing.”

Aside from the health consequences, the program addresses the legal ramifications as well. “Sometimes we also have to fight the misconceptions of what students see on a TV show,” said Bird. “On a TV show, police come in and solve the crime and shut down the drug dealers and do all this stuff in an hour. We have to explain to them that it doesn’t work that way in real life. It takes a whole lot longer to get the information and do the things you need to do.”

While the Drug Bus primarily travels around south Alabama to elementary schools, Bird said students aren’t the only people needing this information. That’s why he takes the program to other venues. Bird said students will drag their parents out to see what they’ve learned.

“And lots of times we get parents on here and they’re shocked. These kids know a lot more than you realize they know.”

Principal Andrews said students need to understand early in life that their decisions today can impact their future.

“Whatever is popular is not always good. And what’s good is not always popular. I think they need to know early on. Early prevention is the key to fighting illegal drug use,” said Andrews.

Bird said the DeBakey Foundation and Mobile Infirmary only want to compliment what schools are already teaching. “Along with Red Ribbon week activities each school’s counselors plan, this program reinforces what they’re being taught in schools so it’s really an important program and the kids love it.”

United Bank is open for business