Despite a career high 35-point game by Jacobey Hawthorne, Neal lost in an overtime battle against the J.U. Blacksher 64-61. 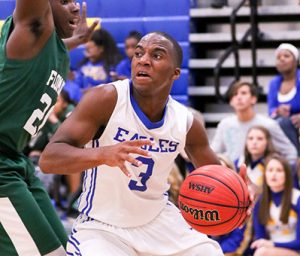 Ronnie Knowles | Down South Photography
Jacobey Hawthorne drives to the basket against Flomaton earlier this season. Hawthorne averaged 27 points for the tournament.

Hawthorne was 8-of-12 from the free throw line and had two steals. Marvin Maddox had 13 points with nine rebounds and three steals. Maddox was  8-of-10 in free throws. Matthew Thomas had seven points. Rickey Samuel had four points and six rebounds. Kenny Walker had two points and five rebounds. J.T. Gantt had six rebounds.

After the tournament, Hawthorne and Maddox were named to the all-tournament team.