A Story of Friendship 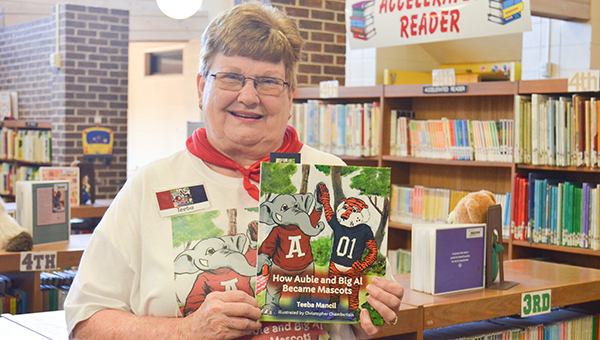 Students at Brewton Elementary School were treated to a special reading by Teeba Mancil of her book, “How Aubie and Big Al Became Mascots”.

The book, illustrated by Christopher Chamberlain, tells the story of friendship between two of the most storied mascots in college football–Aubie of Auburn and Big Al of Alabama.  What was important for Mancil to tell in her story was that even in the biggest rivalry in college football, two opposing sides can still come together in friendship.

“I just wanted to share that friendship between Aubie and Big Al to show it can exist,” Mancil said. “And it should. There should be peace. And I felt the story could still be told in a fun way.”

The book’s inception stems from a long-standing friendship her family shares with the Kelley family, to whom the book is dedicated to. Mancil’s daughter, Angie Terry, donated a kidney to her friend, the Kelleys’ daughter, Erin, after Erin’s kidneys began to fail.

“The transplant was successful,” Mancil said. “Erin had her daddy’s kidney for 28 years before it failed. Our families have been close so long we would always say we were blood relatives. I guess now we really are.”

With an idea in mind for her book she was still apprehensive of sharing the idea with her family.

“We’re all close, and I know they are very protective of me,” Mancil said. 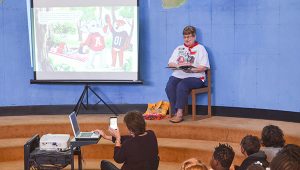 Corey Williams | The Brewton Standard
Mancil reads from her book to fourth grade students of BES. Her daughter, Angie Terry, was in attendance to work the projector.

After some trial and tribulations over a year and four months of putting the book together, Mancil said she finally revealed the finished product to her family and the Kelleys.

“I shared the news with them at a pizza party,” Mancil said. “I disguised the book inside a newspaper and pretended I was going to read from it. Then I dropped the newspaper to show the book. They just hollered. Everyone was excited. My family has really supported me. It’s been fun.”

Her book is licensed by both universities and is shared at both campuses.

“The book is at the University of Alabama on campus at the SUPE store and at Auburn it’s at the Haley Center at the J&M Bookstore,” Mancil said. “I mailed Nick Saban one for his grandchild. Several of the coaches at Auburn have one.”

When she does readings at schools she rarely travels alone. Usually her daughter, Angie, may help, or a member of the Kelley family may help with displaying the books or collecting money.

“I see a lot of children,” Mancil said. “Perhaps 400 at each school. I’ve been to gyms, cafeterias and libraries. That’s usually the setting for me to share the book with them.”

Visiting and reading her book for the students in Brewton is almost a journey come full circle.

Though Mancil is a retired teacher who currently resides in Dothan, she still has roots in the Brewton community. Mancil is an East Brewton native who graduated from W.S. Neal High School where she was a cheerleader and named Miss W.S. Neal. She met her husband at the school. Today her niece, Dana Rowell, teaches first grade at BES and her brother’s grandchildren are students at the school.

“I’ve had a lot of good blessings come about through this book,” Mancil said. “I’m a devout Christian. I felt like through this book I can share friendship, respect and kindness. I know bullying is a big topic right now. And there is so much of that going on in schools. Teachers try their best to deal with it. It’s still an attitude toward other people. That’s the biggest message I want to share in this story, that friendship and respect can still exist, even between the biggest rivals.”

You can order an autographed copy from Mancil for $21 by emailing lcmancil3638@comcast.net.