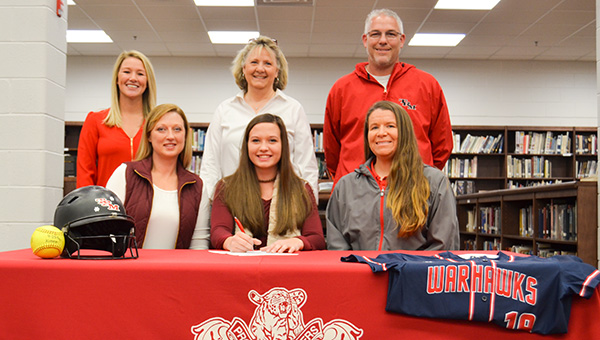 T.R. Miller senior Taylor Austin has added to the list, joining an impressive senior class of 2017 who have signed to play college sports. Austin, who is a three-sport athlete in volleyball, track and field, and softball, has chosen the later after signing her letter of intent to play softball at Jefferson Davis Community College for the Lady Warhawks.

“I have always enjoyed playing softball,” Austin said. “Getting an offer to keep playing changed my decision to go anywhere else. (JDCC) is in town, so I’ll be close to home for my first two years of college. I know players on the team. I like Coach (Misti) Nims. She’s really nice. It’ll be a comfortable transition for me.”

JDCC softball coach Misti Nims said Austin is a versatile player who will be a great fit with the Lady Warhawks.

“Taylor is coming from a great program at Miller,” Nims said. “I know her work ethic and academics will be on track with how we work at JDCC. As a player she’s just very versatile. She can pitch or play the outfield; and at the plate she can hit for power, so I’m excited about that.”

At the plate Austin led the team in batting average (.438), homeruns (five) and slugging percentage (.705). She finished second on the team with 46 hits and 44 RBIs.

Former softball coach Terri Lynne Peacock said it’s Austin’s ability to challenge herself that makes her the athlete she is today.

“She’s talented and she works hard with her talent and I think that makes a big difference,” Peacock said. “The saying is, ‘Hard work beats talent when talent doesn’t work hard’. She has the natural talent but that doesn’t stop her from continuing to build and get better. We’re excited for Taylor. She’s going to do a great job at JDCC.”

“Everything Taylor does she goes full speed ahead,” White said. “She doesn’t slack up. That’s a great quality she’ll carry to the next level. She has all the athletic ability, but the effort she brings to the game of softball you can’t coach.”

Austin’s mother, Sonja Smith, said she is proud of her daughter,

“I’m excited she get this chance,” Smith said. “I think going to (JDCC) is going to give her another two years to mature and grow. I know Coach Nims is a good coach. I’m happy she’s close to home and I can’t wait to watch her play another two years.”

“I couldn’t have done this without my mom,” Austin said. “She’s always at my games supporting me and she has paid for me to go to camps to get extra training. She’s done a lot for me.”

Austin said she also thanks all her coaches for their guidance and support.

“My coaches have been a tremendous help,” Austin said. “They’ve put up with me for so many years.”

Austin said her future aspiration is to become a college softball coach.