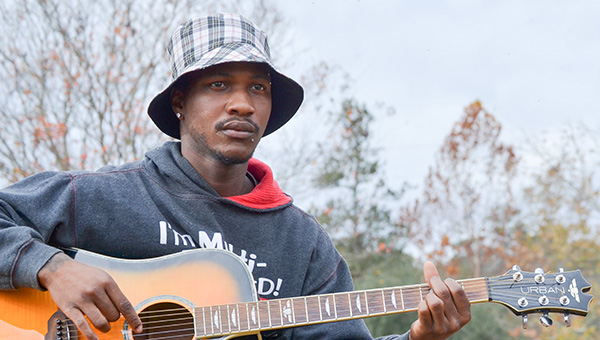 Corey Williams | The Brewton Standard
Curry will audition in Jacksonville, Fla. on Jan. 7 for the NBC show America’s Got Talent.

Curry to audition for America’s Got Talent

This upcoming January, Jacoby Curry and his manager, Gidget Barbaree, will make the 350-mile trip to Jacksonville, Fla. for a lifetime opportunity. While most go to Florida for vacation, it’ll be all business for Curry. The local musician will be auditioning for the NBC hit television show, America’s Got Talent.

At the mentioning of the feat, nerves don’t seem to shake the 20 year old.

This Sat., Dec. 3, Curry will share his musical talents at Fort Crawford Park to raise money to go towards gas; food and a hotel stay for the trip.

“I’ll be doing some performing,” Curry said. “It’ll be a great, family-fun event.”

“My style is a little mixed,” he said. “I can do rap, sing country, gospel, pop and a little heavy metal. I can adapt my voice to change into different genres of music. It’s pretty awesome. It’s taken a lot of practice over the years.”

The performer said he begun singing at the age of 13, but started playing the guitar when he was eight. He is self-taught in the instrument.

Curry said he musically influenced by country music, which began after listening to a song by recording trio, Rascal Flatts.

“Their song ‘Bless the Broken Road’ was the first country song I ever listened to and I fell in love with it,” Curry said. “The thing about country music is it tells a story. Other genres do that as well, but when I listen to country I can sit back, relax and just listen; and its clear to me.

Curry said he enjoys covering songs, which include James Bay’s “Let it Go”.

For his audition for America’s Got Talent, Curry said he will perform Blake Shelton’s “God Gave Me You”.

“I’ve taken his song, and made it 90 seconds so it’ll fit the time frame for the audition,” Curry said. “I’ve performed it for friends and I’ll perform the whole song at the fundraiser.”

His manager Barbaree opened him up to the audition for America’s Got Talent, in which he sent a video to AGT agents, received a ticket and registered to audition.

“(Barbaree) has been good support for me. I didn’t really want to take the trip on my own. She’s been really awesome.”

It’s also the support system of his family that has given him an extra push to go after his dream.

“If it wasn’t for family, I wouldn’t be where I am today. They have been very supportive of me,” Curry said.

Check out Curry at his fundraiser this Saturday from 10 a.m. to 4 p.m. at Fort Crawford Park across from Piggly Wiggly.