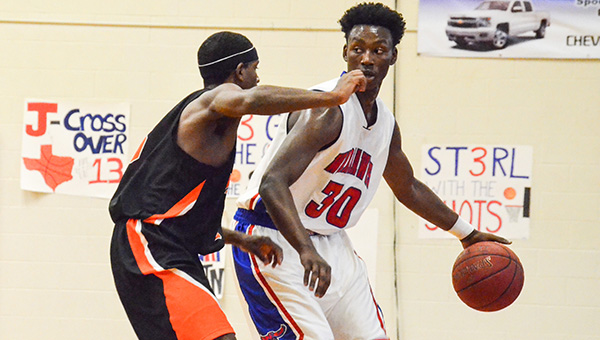 Corey Williams | The Brewton Standard
C.J. Perry brings the ball up court versus Marion Military on Saturday. Marion Military’s defense forced the Warhawks into 26 turnovers for the game

After a comfortable win this past Thursday at home versus Spring Hill College, the JDCC Warkhawks were anything but on Saturday in its 60-48 loss versus Marion Military.

The Warhawks had 26 turnovers, shot 33 percent from the field, with a 37 three-point percentage behind the arc.

JDCC was outscored 33-18 in the first half, with Marion Military closing the half on a 12-0 run.

The Warhawks opted to go for a predominantly big lineup in the second half with Dexter Williams and Melik McMillan anchoring down low.

Though energy picked up in the second half, JDCC was unable to mount a comeback after a couple three pointers down the stretch by Marion Military.

On switching to the bigger lineup, JDCC head coach Allen Gainer said he was looking for a combination to get his team back in the game.

“At that point in the game we were trying any combination to get something started,” Ganier said. “We made a nice run with the bigger group, but it just wasn’t enough.  In addition to turning the ball over way too much, we missed a total of 14 layups or short shots.  Nine of which were uncontested.  Against well-coached, strong teams you can’t expect to win with those types of mistakes.”

Leading JDCC in scoring was Tez Brooks with 12 points. Williams, Von Evans and JaDarius Wilson each had seven points.

Against Spring Hill on December 1, JDCC took a 40-34 lead into halftime and never looked back. The Warhawks outscored Spring Hill 42-26 for an 82-60 win, its largest margin of victory this season.

Leading JDCC was Brooks and Richard Boggan with 18 points each. C.J. Perry had 17 points. As a team the Warhawks shot 47 percent from the field.

JDCC will play today, Dec. 7, at 7 p.m. at Stillman College. The team will return to home court versus Southwest Tennessee Community College on Sun., Dec. 11, at 2 p.m.