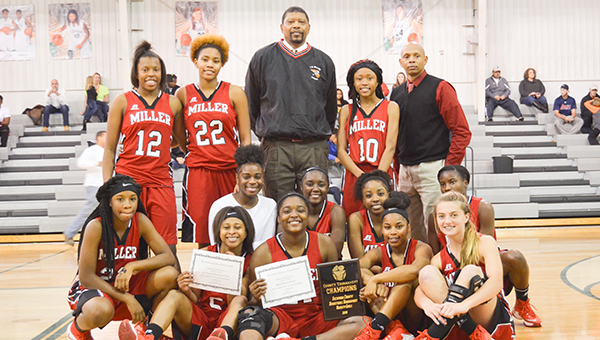 The Lady Tigers got out to an early lead and never looked back in its first win of the tournament.

The Tigers made a late run at the end of the second quarter to keep the game close, but found themselves hampered by 20 turnovers and a good shooting night by the Blue Devils, notably Triston Knox who finished the game with 21 points of off seven made three-pointers. Michael Smith led Miller in scoring with nine points. Devon Robinson led the Blue Devils with 27 points.

Points were hard to come by early on for the Lady Eagle. The team finally cracked the score column with 2:20 to go in the first quarter on a bucket by junior Marishia Fraser. Neal trailed 21-11 at the half. Flomaton outscored Neal 21-16 in the second half.

The game proved to be thriller between the two teams. The Eagles led 49-46 with a 1:30 to go in the fourth after two key free throws by Kenny Walker.

On the next trip down court, Flomaton made an attempt for a three-pointer but missed, a Flomaton player was able to recover the rebound and kick it out to No. 12 Trey Dixon for the open three-pointer to tie the game 52-52 with 29 seconds left to play.

After a timeout by the Eagles, guard Jacobey Hawthorne drove to the basket and made a dump off pass to teammate Marvin Maddox for the wide-open layup to give the Eagles a 52-50 lead.

Dixon attempted another 3 pointer for the stretch but missed as time expired.

Miller proved too much with its defensive pressure against Neal.

It was a sloppy game between the two rivals in its first matchup of the season.

Jacobey Hawthorne and Marvin Maddox led Neal in scoring with seven points each.

Miller out rebounded Neal 41-20. Both teams were in double-figures in turnovers with Neal having 14 and Miller, 27.

The top scorer for Neal was MeeMee Lawson with four points. Haley Watson, Tori Gillam and Tatum Reeves each had three points.

A 26-point second quarter and a 19-point third quarter was enough for the Blue Devils to cruise to a comfortable win over Neal.

Neal had 28 turnovers in the game.

The Lady Tigers cruised to the win in the final round of the county tournament.

After only scoring nine points in the first quarter, Miller rebounded in the second to go into halftime down only 21-24. The Tigers put themselves in a position to tie the game down 43-40 in the fourth, but missed a three-point attempt. Flomaton closed out the game with two key free throws by D. Armstrong.

Named to the All-tournament team for the girls were Marishia Fraser of WSN; Ja’Quada Webster of Escambia County; Tamara Dunn of Flomaton; and Morgan Longmire of TRM. Aleria Smith of TRM was named most valuable player.

Named to the All-Tournament team for the boys were Jacobey Hawthorne of WSN; Joshua Jolly of TRM; Daquan Johnson of Flomaton; and Triston Knott of Escambia County. Devon Robinson of Escambia County was named most valuable player.