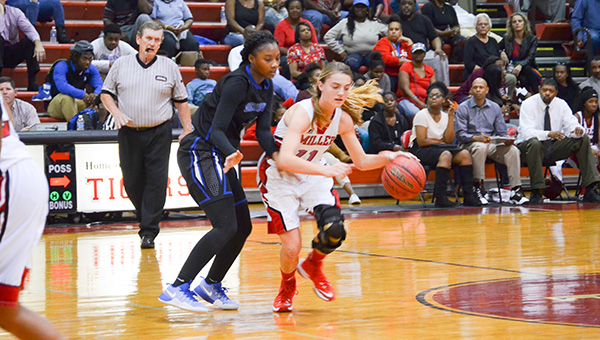 Defensive pressure was a factor in the game, as the Lady Tigers forced Georgiana into double figures in turnovers.

Leading Miller in scoring was Kyla Bell-Barton, who was a strong presence underneath the basket, scoring 17 points. Aleria Smith had 13 points. Raivon Ewing and Malaysia Campbell each had five points. Steely Ruzic and Amaiya Johnson each had four points.

Miller improves to 7-1 for the season.

After a slow start in the first half, the Tigers began to make a move midway through the fourth quarter. After a three-pointer by Keinderus Mobley to make the score 37-32 in favor of Georgiana, Joshua Jolly drove to the basket for a made layup. Georgiana add a basket to make the score 39-34. With two minutes to play Jolly connected for a three-pointer to trim the Georgiana lead, 39-37. On the next Tiger trip down court, Jolly found teammate Jordan Williams in the corner for a clutch three-pointer to give the Tigers a 40-39 lead, its first of the game. DeAarion Square of the Panthers added two free throws to give Georgiana back a one-point lead. The Tigers rebounded when Darius Williams dished it off to Cody Hall down in the block for a bucket. Tigers led 42-41.

After both teams went 0-for-2 at the line, Georgiana’s Ja’Michael Stallworth drove to the basket for a go ahead layup to give the Panthers a 43-42 lead. With no timeouts left, the Tigers dribbled the length of the floor. Jolly put up a contested shot that fell just short of the basket as time expired.

Nizaiah Smith had 12 points to lead Georgiana. Smith, Mobley and Square each had eight points.

Jolly led Miller with 21 points. Shiv Patel, who had three big buckets in the third quarter, had eight points off the bench.

Miller is 1-5 for the season

Miller basketball will next travel to play W.S. Neal on Fri., Dec. 16 with games beginning at 4:30 p.m. Games will be played at the W.S. Neal Middle School gymnasium.