T.R. Miller senior wide receiver and defensive back Joshua Winton was recently honored as the Challenger Award winner for 2016 at the 48th Annual Challenger Banquet at Pensacola’s First Baptist Church.

The award, given by the Pensacola-area Fellowship of Christian Athletes, is presented to a player from all participating schools, as voted upon by their respective teammates. It is given to the player who exemplifies the ideals of FCA, including Christian character on and off the field, as well as leadership, integrity, sportsmanship and academic achievement. 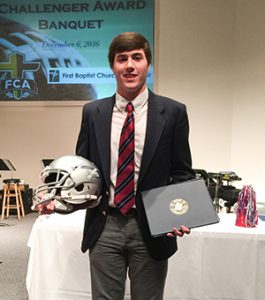 “Joshua being selected by his teammates for this award says it all about what kind of person he is,” said TRM head coach Andrew Thomas. “He shows daily the attributes a Christian should– handworker, responsible, accountable, caring of others and a great teammate to play alongside with. It’s been a pleasure to coach him. He’s very deserving of this honor.”

Winton helped lead the Tigers to a 40-9 record over his four years as a varsity player, including two region championships and nine playoff games. During that time, Winton averaged over 15 yards per reception.

In the classroom, he holds a 4.2 GPA in the Honors Program, achieved a 30 ACT score and is eighth in his class. He serves as president of TRM’s FCA Huddle, and also serves as chaplain for the Student Government Association. A member of the National Honor Society, Winton has been recognized for his leadership, having been elected president of his junior class and named the HOBY Award for Leadership winner. Winton is a member of First Baptist Church, where he is an active member of the student ministry and has served in mission opportunities both locally and internationally.

Upon graduation from T.R. Miller, Winton plans to attend Shorter University in Rome, Ga., where he will play baseball and pursue a degree in Christian Studies and Leadership with a focus on Youth Ministry. Last spring Joshua helped lead the Tiger baseball team to the quarterfinals of the AHSAA Class 3A baseball playoffs and was named the Defensive Most Valuable Player.

“Joshua was always a very tough and dedicated player who cared more about others than he did himself,” said former Tiger head coach Jamie Riggs. “He truly lives his faith on a daily basis whether on the field, in the classroom or serving as president of our FCA at T.R. Miller. It was a joy to coach him. I know he has a very bright future.”