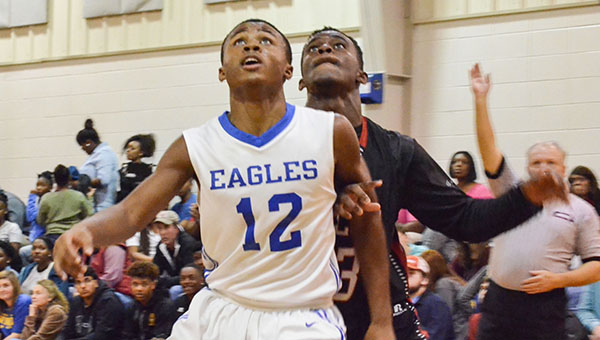 The W.S. Neal boys’ varsity basketball team closed out the evening with a bang on Friday, overcoming a 11-point fourth quarter deficit to defeat T.R. Miller 55-51. The WSN B-team also picked up a win. The TRM Lady Tigers was dominant in its 46-6 win over the Lady Eagles.

The Tigers began the fourth quarter on a 7-0 run to bring the score to 27-20 in favor of the Eagles. Neal’s Li’Terrance McCants stopped the bleeding with a three-ball to extend the Eagle lead back to 10. Miller’s Micah Flores connected for a three-pointer to shrink the Neal lead back. The combination of Jordan Hails and Aquarius Taylor was too much for the Tigers down the stretch, as both combined for seven points to outscore Miller’s three points.

The Lady Tigers continued their dominance on the court Friday behind 13-point scoring nights from junior, Steely Ruzic, and freshman, Janazsia Nettles. 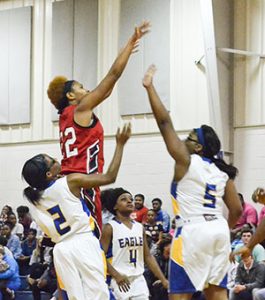 Corey Williams | The Brewton Standard
TRM’s Kyla Bell-Barton goes up for a shot against Neal.

Neal scored all six of its points in the first quarter.

Sometimes all a team needs is a little momentum to get back in the game, and that’s what Neal received after a technical foul with 2:30 left to go in the fourth quarter. In less than 20 seconds, the Eagles scored seven points. After beginning the quarter with a 38-27 lead, the Tigers found themselves up 43-42.

Neal responded with a basket by Jacobey Hawthorne to tie the game. On the next Miller inbound, Maddox stole the ball and made the layup to give Neal a 53-51 lead. With no time outs left, Miller tried a long pass down court but failed on the attempt. Maddox added two more free throws down the stretch to ice the game for the Eagles.

Miller had 22 turnovers to Neal’s 14; and 29 personal fouls to 18, respectively. Three Miller players fouled out of the game.