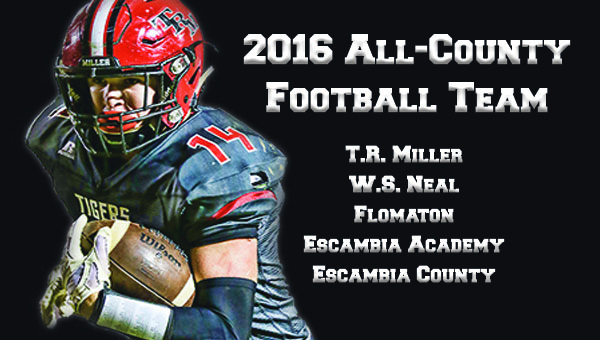 Booker played wide receiver on offense, kicked punts, returned punts, etc. Whenever the Tigers needed a playmaker it was No. 14 who was usually the one to get the job done. 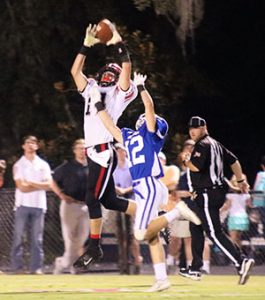 Photo Allison Terrell
Booker goes up for a catch against Bayside Academy.

Where Booker arguably shined the most was on defense.

The Tigers entered the season young, with little experience in the secondary. Booker led the group with nine interceptions, including returning an interception for a touchdown against cross-town rival W.S. Neal on Oct. 28.   Twice Booker recorded the hat trick in interceptions (Sept. 9 against Hillcrest Evergreen and WSN).

From causing havoc with a hit (26 solo tackles), his hands, or leadership (team captain) on and off the field, Booker made quite an impact for the TRM Tigers, who stayed in the Class 3A top-ten for the whole season. 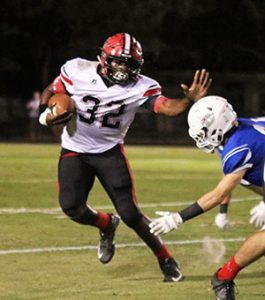 Campbell had his best game on homecoming night versus region rival Flomaton on Oct. 7.

The 220 pound junior was a work horse with 26 carries and 253 yards yards. He finished the night with three touchdowns.

The best may be yet to come for Campbell, who will be a senior next year. “Soup,” as he’s known to teammates and coaches, may be handing out ladles to opponents next season on not just the offensive side of the ball but as well on the defensive side at linebacker.

Coach of the Year

Fountain helped lead the Cougars to their second state championship game in three years. He also eclipsed the 200-win mark in the state semifinals. EA finished at 8-5 on the season. 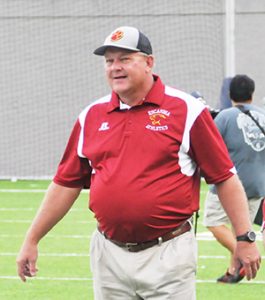 The head coach said the award’s credit goes to the players.

“To me, it goes to the players because they make the season,” Fountain said. “Even though we didn’t win a state championship, but we played in it, that was an accomplishment with our guys.”

Fountain said the EA culture is one where a lot of the coaches take pride in being able to coach high-caliber athletes.

“This award, to me, is about these guys and the assistant coaches,” he said. “They’ve been with us for a couple of years.”

Fountain said the coaches always stress to the players that it’s the end of the season that matters.

Fountain said the players are willing to play in different positions if need be.