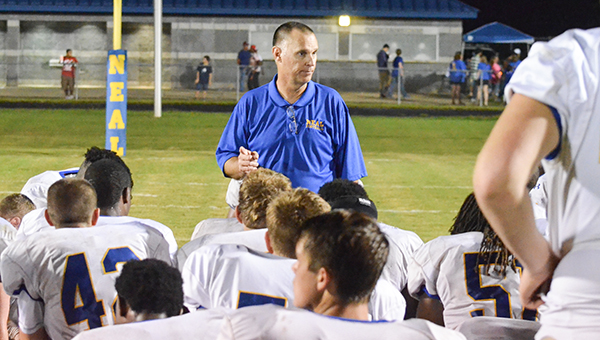 Corey Williams | The Brewton Standard
WSN head coach Doug Hoehn speaks to the team after its preseason game versus Aliceville this past season.

W.S. Neal is looking for a new head coach and athletic director.

On Tuesday, WSN head football coach Doug Hoehn accepted the head coaching job at Class 7A Alma Bryant. He will begin the new position on Feb. 1, 2017.

“I talked to the school administration earlier this week,” Hoehn said. “The administration at Neal has been great to me. I’ve really enjoyed my time at Neal. I felt like we did some good things. The only thing I regret out of this was I wish the decision would had been made while we’re still in school so I could have talked to the kids. They’ve done such a great job since I’ve been here, and I think the world of them.”

In January, Hoehn said his main focus is to get eligible players ready for college.

“I really want to tidy up and make sure the kids that are going to play college ball are all set,” he said. “That’s going to be my main focus before I leave is to get those kids set for college.”

Hoehn was named WSN head football coach and athletic director in 2010. In six seasons he compiled a 33-31 record, making the playoffs three times in his tenure. As a teacher, he taught driver education.

Hoehn will join an Alma Bryant team who ended this past season 1-9 and hasn’t earned a playoff birth since 2003.

The Brewton Standard will update this story in next week’s printed edition.