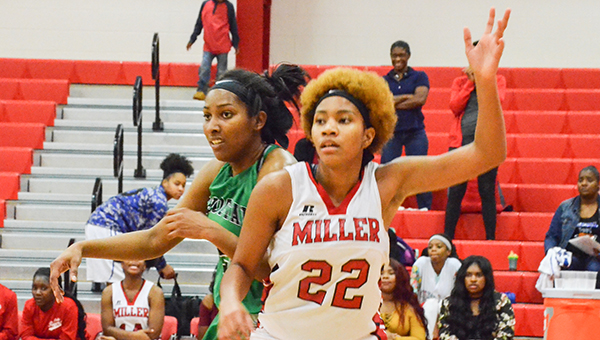 Corey Williams | The Brewton Standard
Kyla Bell-Barton gets position in the post against Choctaw. Miller won in overtime 47-43. Bell-Barton finished the game with a team-high 16 points.

The T.R. Miller boys, and W.S. Neal boys and girl’s teams had trouble getting in the win column at the T.R. Invitational held on Dec. 22 and Dec. 23. The Miller boys lost by large margins in its games versus Atmore and Monroe County.

The WSN boys suffered a 21-point loss at the hands of Hillcrest-Evergreen; and lost a close game against Flomaton. The WSN girls went 0-2 in the tournament. The TRM girls went 2-1, with its most notable win coming in overtime against Choctawhatchee.

It was all TRM in the blow out win. Escambia High failed to score in the fourth quarter.

It took over time to decide a victor after Choctaw’s Gabby Brown drained a deep three pointer at the buzzer to tie the game 39-39 at the end of the fourth.

Miller outscored Choctaw 8-4 in overtime to seal the victory.

Leading Miller was Kyla Bell-Barton with 16 points and Steely Ruzic with 14 points.

Rebounding, turnovers and three-point shooting was the trifecta for Atmore in which it dominated the Tigers.

Miller was outrebounded by Atmore 41-26, which resulted in 26 points for the Blue Devils. Atmore shot 32 more shots than Miller. Atmore made 10 three-pointers in the game. Miller made one three-pointer.

The Tigers had 24 turnovers, compared to Atmore’s 10.

Miller trailed Monroe County 15-14 after the first quarter. The rest of the game was all Monroe, with the away Tigers pressuring the ball full court causing Miller turnovers.

The Eagles had 25 turnovers against the Class 3A top-10 ranked Hillcrest-Evergreen Jaguars. Neal also shot poorly from the free-throw making 11-out-of-32 attempts.

Despite a good second and third quarter from the Eagles, Flomaton closed out the game outscoring Neal 18-13 in the fourth quarter to defeat the Eagles for the second time this season.