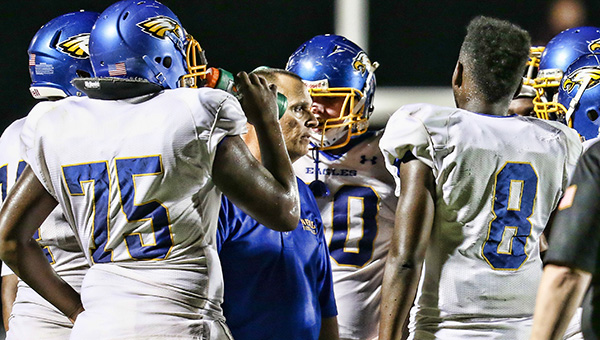 Ronnie Knowles | Down South Photography
Coach Hoehn addresses the Eagles during a huddle.

W.S. Neal is on the hunt for a new head football coach and athletic director.

Last week WSN head football coach Doug Hoehn accepted the head coaching job at Class 7A Alma Bryant. Pending approval from the Mobile County School Board in January, he will begin the new position on Feb. 1, 2017.

“I talked to the school administration last week,” Hoehn said. “The administration here at Neal has been great to me. I’ve really enjoyed my time at Neal. I felt like we did some good things. The only thing I regret out of this was I wish the decision would had been made while we were still in school so I could have talked to the kids. They’ve done such a great job since I’ve been here, and I think the world of them.”

In January, Hoehn said his main focus is to get players ready for college.

“I really want to tidy up and make sure the kids that are going to play college ball are all set,” he said. “That’s going to be my main focus before I leave, to get those kids set for college.”

Escambia County School Board Superintendent John Knott said Hoehn has done a good job with rebuilding the football program and serving as athletic director at Neal.

“(Hoehn) came to a W.S. Neal program that had been down the last couple years prior to his arrival,” Knott said. “He came in and completely rebuilt the program.

“We hate to lose him, but we understand that opportunities present themselves,” Knott said. “We know this is an opportunity for him to go to a very big school. The (Escambia County School Board) wishes him the best on this new chapter he’s entering in his coaching career.”

Prior to Neal, Hoehn coached at Hattiesburg for five years, compiling a 32-28 overall record, which was both 5A and 6A during his tenure. The school had not won a playoff game for six years prior to his arrival.

Hoehn was named WSN head football coach and athletic director in 2010. In the season prior WSN set a team record in losses, finishing 0-10. After a 1-10 season in 2011, Hoehn led the Eagles to a 9-3 season. The team made it to the second round of the playoffs that year.

In a total of six seasons, he compiled a 33-31 record, making the playoffs three times in his tenure. As a teacher, he taught driver’s education at WSN.

Hoehn will join an Alma Bryant team who ended this past season 1-9 and hasn’t earned a playoff birth since 2003. The Hurricanes have only won three games in the past three seasons.

With the departure of Hoehn, Knott said the process will begin searching for a replacement.

“We’ll go through the process of his official resignation and begin a search,” Knott said. “We’ll do a wide search, and hopefully get some good applicants.

“We’re heading into a future where we’re stepping into an excellent facility–brand new 10,000 square foot field house, a girl’s athletic center and brand new school. I think that’ll be attractive to some potential applicants.”