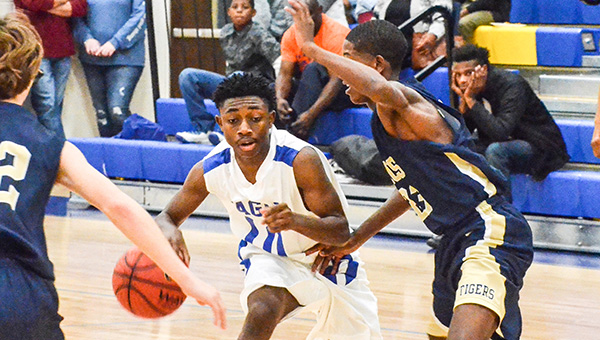 The W.S. Neal B-team found itself down 8-20 at half time, by two minutes left to play in the game, the Eagles found themselves trailing only 27-29.

Monroe’s Ja’carri McPherson drained a three pointer to extend the lead and draw a sigh of relief from the Monroe crowd. On the next play down court, Neal’s Dylan Ingram drew a technical foul. Ingram drained three free throws.

On the next possesion Ingram made a tip in at the goal to tie the game, 32-32. Monroe pushed to play keep away from the Eagles. The Tigers eventually drew a foul , converting a free throw to take the lead, 33-32. The score proved to be the final of the game.

The girls varsity team lost to Monroe, 50-9. Monroe’s Antania Hayes had 18 points to lead all scorers.

The boys’ varsity lost to Monroe, 60-16.  Monroe’s Jeremy Calhoun had 12 points to lead all scorers.