Faulkner named 2016 Coach of the Year 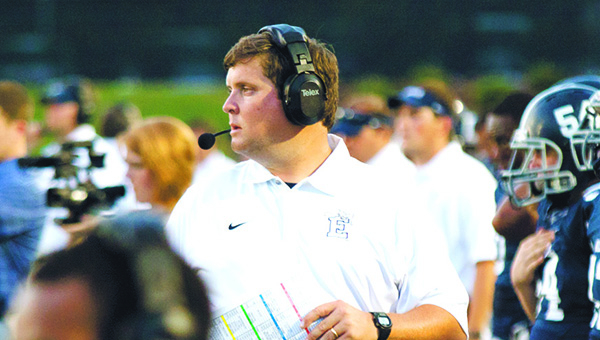 Enterprise head coach and Brewton native, David Faulkner, was named Class 7A Head Coach of the Year this past December by the Alabama Football Coaches Association.

Faulkner said it’s a tremendous honor to be recognized by your peers.

“We give a lot of individual awards, but there are no awards that can be won by yourself in this sport,” Faulkner said. “That holds true for coaches. Being recognized by the coaches association is a great honor, but it’s a tribute to the work our coaches and kids have done not just this year but in the last five years trying to build this program.”

Faulkner led the Wildcats to a 10-win season in 2016, the most the program has won since 1993. The Wildcats advanced to the second round of the playoffs before falling to McGill-Toolen, 23-27. The team finished ranked No. 6 in the state in Class 7A.

Seven players on Enterprise were named to the Class 7A all-state team, including first team recipients– senior defensive back, Marcus Jones; and junior punter, Andrew Osteen.

Moving forward after the success of this past season, Faulkner realizes each season is a process.

“I hope that our kids understand that in watching our seniors over the last three years that they continue to improve and build the program that our guys falling behind them will duplicate,” Faulkner said. “It takes hard work and commitment and leadership in order to be successful. I think our guys are really excited about what’s going on in our program right now. Our upcoming senior class have learned some valuable lessons from their predecessors. I feel really confident that they’ll continue to do the things you need to do to be successful.”

Faulkner is a 1989 graduate of T.R. Miller where he played quarterback for the Tigers. After T.R. Miller, Faulkner went to Troy and graduated in 1996.

He has served as a coach at Clarke County, Alma Bryant, Prattville, Hoover, Foley and Fairhope before joining Enterprise in 2012.