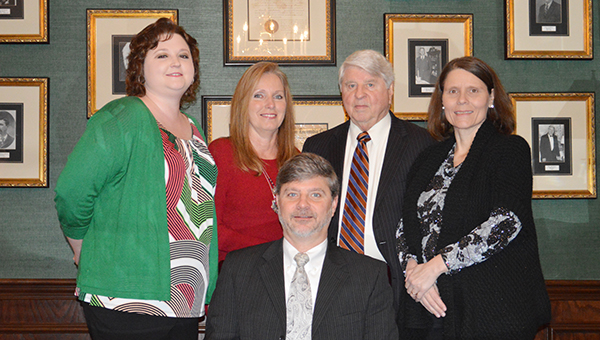 The Bank of Brewton, Alabama’s oldest bank, celebrated its 128th birthday on Jan. 7.

Kelly Jr. succeeds his father, Jerry M. Kelly Sr., who served as bank president for 37 years. The move was approved by a vote on Jan. 10 by the bank’s board of directors and marks the third generation of the Kelly family to preside over the bank. Kelly Sr. was installed as president in 1980 and followed his father, A.E. Kelly, who first began managing the bank in 1968.

Kelly Jr. began his career with Bank of Brewton in 1990 working in the bookkeeping department and substituting as a teller when needed. He was promoted to Vice President and Loan Officer in 1991 and added to the Board of Directors 1992.

In addition to promoting Kelly Jr. to president, a number of other promotions were made and included:

• Eddie Nail to the office of Executive Vice President;

• Darlene Barnes to the office of Senior Vice President;

• Rhonda Grantham to the office of Vice President; and,

• Jannette Coon to the office of Vice President.

Kelly Sr. will continue his service with the bank as Vice President and Chairman of the Board of Directors.

Nail was hired in 1970 and has since worked as a bookkeeper, teller, loan officer and security officer and is now the bank’s compliance officer and internal auditor.

Barnes started her career as a teller in 1990. She was transferred to the Loan Department in 1995 and was promoted to Vice President in 1999 and North Brewton Branch Manager in 2006.

Grantham began her work at Bank of Brewton as a teller in 2007 and is currently head bookkeeper.

Coon also began her career with the bank in 2007 as an administrative assistant and is currently the customer service representative.

These officers have more than 170 years of combined banking experience and are ready to assist with all banking needs.