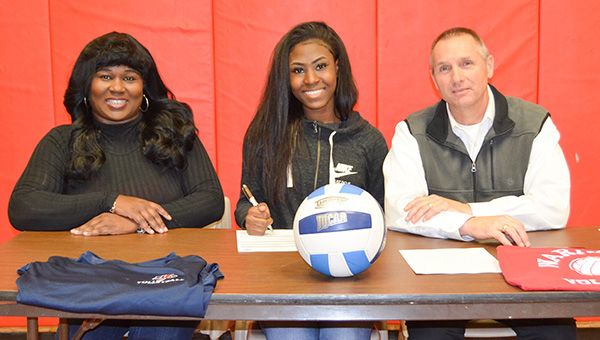 W.S. Neal senior Dinah Samuel will be attending college next year to play volleyball. She won’t have to take her talents too far, as she will be playing for Jefferson Davis Community College.

“I’ve been playing volleyball since seventh grade,” Samul said. “I love to play. It’s the only sport that I play. In college volleyball is something I wanted to do while getting my education. (JDCC) is the right fit for me.”

JDCC volleyball coach Steven Dickey said Samuel will bring skill and competitiveness to the team, a team that finished 5-20 in 2016.

““I think from an outside hitter standpoint (Samuel) will really present tough matchup problems for other teams that we play,” Dickey said. “I’m excited to have someone here locally to come play for us.”

Samuel had a season high 27 kills versus Jay on October 4. At super regionals she shined with 18 kills versus Hale County. She had six games of at least 20 kills. Samuel’s stellar season (318 kills, 176 service winners and 64 aces) earned her a spot on the Coastal Alabama All-Region team as an honorable mention selection at the outside hitter position.

“(Samuel) made my job easy,” said WSN head volleyball coach, Jason Blaney. “She was a leader of the team. Her heart and desire is next to none. In the classroom she excels also. I have no doubt she’ll do great things at JDCC.”

Blaney said Samuel signing with JDCC is big for the volleyball program at WSN.

“It’s a huge step for us moving forward,” he said.  “I appreciate all that Dinah did in helping our program progress to where we want to head in the future.”

Samuel said she plans to improve on her aim in serving. She looks to grow at JDCC and continue her playing days at a four-year college. 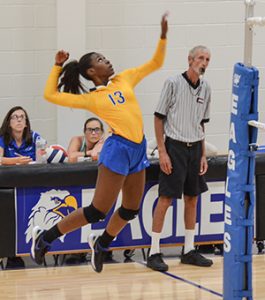 “I’ve had other girls that have gone on to play at four year universities,” Dickey said. “I have no doubt she can do that if she continues to work hard.”

Dickey said there will be some competition for the three outside hitter positions next season. The head coach spoke to Samuel about the road ahead in which Samuel gave an assuring nod of approval.

“I have found in my four years here that this league is tough,” Dickey said. “Competition is good in the state and the schools on the Florida panhandle. The freshmen who come in realize that right away. I’m hoping (Samuel’s) athletic ability, her intensity, and her competitive nature will benefit the team and rub off on her teammates.”

Samuel’s skill and love of the game has got her to this opportunity, but it’s not lost on the soon to be WSN graduate that some special people were instrumental in helping inspire her along the way.

“I’d like to thank my mom, my siblings, and coach Blaney for all their support,” Samuel said.

Samuel’s mother, Karisky Samuel, said she always believed her daughter could do anything she set her mind to.

“It’s really great,” Ms. Samuel said. “I knew she would always do a good job. She’s a hard worker and I’m really looking forward to seeing her play volleyball locally while she’s getting her education.”

Samuel said she plans to study nursing in college.