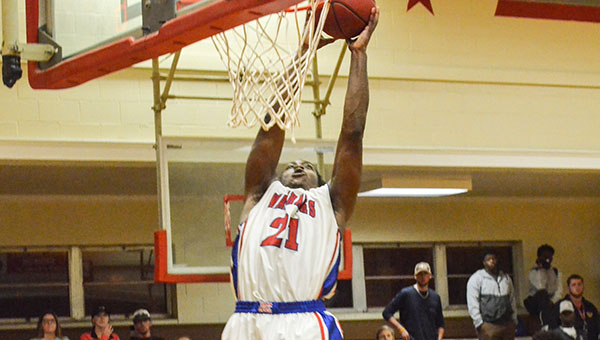 It was a back-in-forth game between conference rivals Coastal Alabama and Lurleen B. Wallace Community College. In the end it was the Warhawks coming out victorious in front of its home fans, 68-64.

“We made plays happen down the stretch,” said Coastal Alabama head coach Allen Gainer. “That competitive edge put us over the top.”

“We know each other well,” Gainer said. “We had a good scouting report on LBW, and the kids bought in to what we wanted to do. They did a great job of executing the game plan. If we can execute and get good shots up, we’ll be successful.”

Coastal Alabama’s Richard Boggan gave the Warhawks a 61-59 lead with four minutes to go off a made bucket. The Warhawks extended its lead on a free throw by CJ Perry. LBW answered with a two-pointer by Darrell White and free throw by Travious Johnson to tie the game 62-62.

The next trips down court proved to be some successful play calling, primarily off some stellar passing by sophomore point guard, Sterling Hinton.

Out of the timeout, Hinton found a leaping Boggan for an alley-oop slam-dunk. Hinton then found a cutting Keonte Edwards for an easy layup at the rim to extend the Coastal Alabama lead, 66-62. Hilton Roberts of LBW made a jumper to keep his team alive with only 14 seconds left to play. Coastal Alabama closed the final seconds of the game on a defensive steal and made layup by Tez Brooks.

Leading Coastal Alabama in scoring was Perry with 14 points. Edwards had 13 points and six rebounds. Boggan had 11 points. Jamal Gray had 11 points. Hinton had a game-high, 10 assists to go with eight points.

The win marks the second in three games for the Warhawks.

Coastal Alabama is 5-7 for the season.