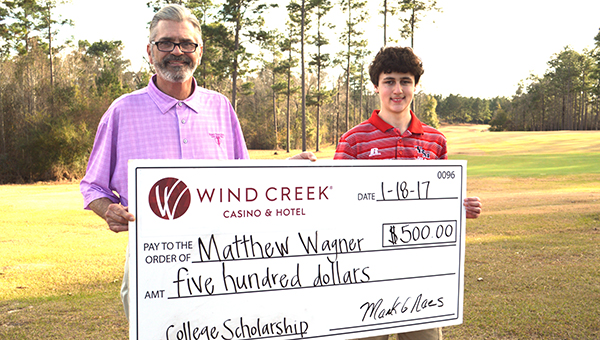 Matthew Wagner, a T.R. Miller freshman, has been awarded a scholarship from Wind Creek Casino in Atmore for his help in a recent collegiate golf tournament.

Held at the Brewton Country Club this summer, the 2016 Hardees and Wind Creek Casino Collegiate tournament drew a number of athletes to the green.

Tour executive director Mark A. Naes said the May tournament wouldn’t have been possible without the volunteer and sponsorships.

“Among those volunteers was Matthew Wagner, and because of his help on the course, things went beautifully,” Naes said.

Wagner, the 15-year-old son of Anita and Dan Wagner, helped set up the range and provided water to participating athletes during the event. A member of the TRM golf team, he has played the sport since he was 4.

“My dad is a big player,” Wagner said. “I love the challenge of the sport. Every day it’s a new experience, and each hole a new journey. It’s really a you versus you sport, and I very much like that.”

Wagner, who wants to pursue an engineering career, said he also enjoys playing for the Tigers – and maybe one day, come back and compete at the collegiate level on the club’s course.

“(TRM) will be doing some more tournaments this year,” he said of the team coached by Marc Edge. “We’re going to do two 18-hole tournaments in Monroeville and maybe a nine-hole in Atmore. I also play on the Southeastern Junior Golf Tour, and maybe, one day on a college team.”