Webb to compete on national stage 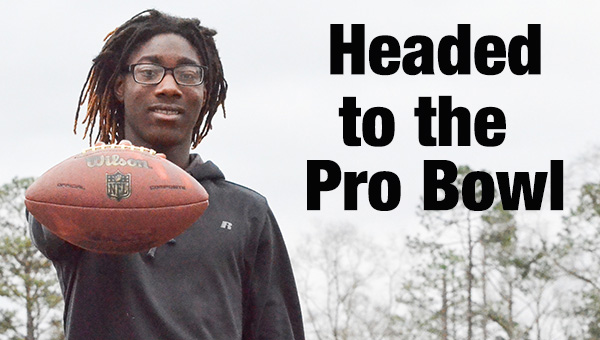 It’s not every day someone gets to display their talents on a national stage. This Friday, Brewton Middle School eighth grader Darius Webb will do just that.

Webb will represent the New Orleans Saints at the National Football League Punt Pass and Kick National Championships in the boys 12-13 age division in Orlando. The event is part of a festive NFL Pro Bowl weekend.

Finalists competing advanced to the national championships through local, sectional and team championship competitions held throughout the NFL regular season. The top four scorers in each age group from across the country qualified as national finalists.

“USA Football is pleased to manage the Punt, Pass and Kick program, and we congratulate our national finalists,” USA Football Executive Director Scott Hallenbeck said. “The Punt, Pass and Kick competition is an exciting opportunity for our young athletes to showcase their skills in a competition rooted in the games fundamentals. We’re looking forward to an exciting week in Orlando.”

Webb will compete against three other contenders Thomas Nattania of Virginia Beach, Va.; Ethan McDaniel of Goodland, Kan.; and Nathan Wulff of Omaha, Neb. Of the four, McDaniel had the best totals at the team championship round, with a distance of 379. In comparison, Webb scored a total distance of 353.

“I’m trying to improve to beat the people I’m going against,” Webb said. “That has been my focus. I know it’s going to be hard, but I’m going to give it my all.”

Webb said he likes kicking the most and wants to improve on his punting. That being said he practices when he gets the opportunity.

“Right now, I’m involved with basketball which keeps me pretty busy, but I practice when I have spare time. My step-dad helps me out to prepare.”

Webb is a two-sport athlete at BMS, playing football and basketball. He plays running back on offense and predominantly safety on defense in football. 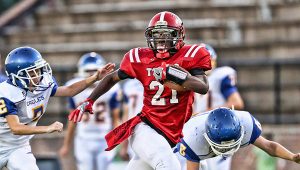 If the nerves of competing on the national stage reside in Webb, the 13-year old doesn’t show it. Webb has answered to some big moments in sports so far.

He made a leap to the varsity basketball team in December. In football, he made a play that resulted in the win for his team. When the play is revisited by Jeff Waldrop, Webb’s middle school football coach, it seems more folklore than fact. But Waldrop doesn’t let off that play that lifted the Tigers over Satsuma.

“Darius picked up a fumble, broke what seemed like eight tackles and ran it in for a touchdown,” Waldrop recalls.

“He had about 200 yards rushing that game. As well as about 12 tackles at linebacker. We were down in the game, and a couple of our players moved up to varsity and one was hurt. He had to come up from safety and play linebacker. I think that speaks volumes of what kind of athlete Darius is. He makes the adjustments and goes out and plays.”

“He works us out three days a week in the weight room.

Waldrop said it has been a good experience to watch Webb grow and develop as an athlete.

“He’s getting use to competitive sports now,” said Waldrop. “He’s maturing throughout the year. And physically in the weight room he has grown a lot.”

Webb said he will make the flight to Orlando with his mom on Thursday. After competing, he will also get the special treat to watch the Pro Bowl on Sunday. So who’s the player he looks forward to seeing the most?

“I like Ezekiel Elliot,” Webb said. “I always watch the (Cowboys) games. But I’m an Atlanta Falcons fan.”

Which makes Webb a happy camper, since his Falcons will take on the New England Patriots in this year’s Super Bowl.

Webb is the son of Porsha and Javon Pleasant.