Brewton native and T.R. Miller graduate Deanna Jackson was immortalized by the University of Birmingham women’s basketball team this past week, when the Lady Blazers retired Jackson’s No. 23 jersey at the Bartow Arena in Birmingham. 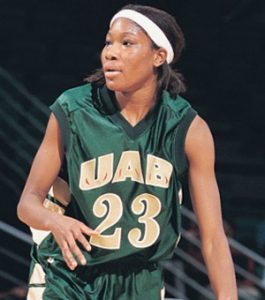 As a senior Blazer in the 2001-02 season, Jackson was selected as a finalist for the Women’s Naismith College Basketball Player of the Year Awards, in which she averaged a double-double of 26.2 points and 12.3 rebounds.

She averaged 28.4 points and 14.6 rebounds her junior year; and 28 points, 14 rebounds and six assists her senior year.

In her career at TRM the Lady Tigers were Class 4A state champions her freshman and sophomore seasons and runner-up her junior and senior seasons. She was named as one of the top 100 players in the country by USA Today.

She is the all-time leading scorer at TRM with 2,398 points. Her sister Felicia Jackson, who also played at UAB, is third all-time with 1,911 points.