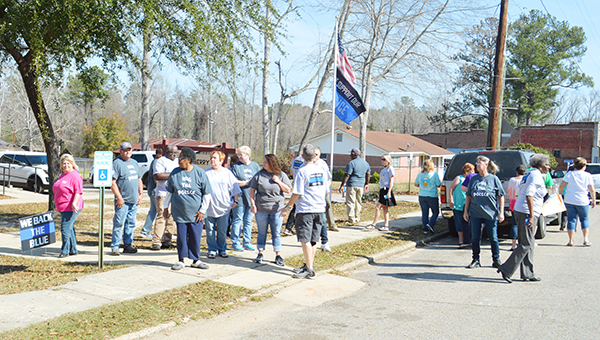 Stephanie Snodgrass | The Brewton Standard
More than 20 residents gathered to show their support for the Castleberry Police Department Monday.

The suit, filed Friday, alleges Hawsey and his officers acted as “a roadside judge, jury and executioner” by imposing a $500 vehicle and/or conveyance impound fee on those arrested for drug crimes, as well as the illegal confiscation of more than $5,550 in cash. The suit claims that Hawsey, his employees and town officials failed to give the accused due process or follow the state’s forfeiture laws. 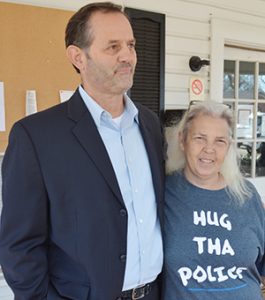 Evergreen attorneys Tommy Chapman and Richard Nix said the case came to light when the plaintiffs, who reside in Alabama, Georgia, Virginia and Florida, approached the pair about six months ago. The suit also alleges the “vague and ambiguous” impound fee ordinance was not legally adopted and the town council abused its discretion in enacting it.

Chapman, a former Conecuh County district attorney, explained a scenario that serves as the suit’s basis.

“Say you’re a parent, and your son or daughter is coming up (Ala. Hwy.) 31 trying to get back to school at Alabama or Auburn and is going five miles over the speed limit,” Chapman said. “They see blue lights behind them, pull over and when the officer asks if they have anything illegal in the car or on their person, not remembering when she took her medicine and put it in her purse it wasn’t in the bottle.

“The officer, who’s called for backup, and the drug dog, places her in the patrol car and proceeds to search the vehicle, go through her purse and find the pills, several hundred dollars for school,” he said. “They impound her vehicle, take her to jail, but she’s able to get out after signing her own bond, which was approved by the chief.

“Then, she’s told she has to pay a $500 impound fee whether she’s guilty or not,” he said. “Her parents come, bring her prescription, pay the fee and no charges are filed. She’s embarrassed, placed in jail. She’s made to pay a fee. They take all her money and didn’t file anything in court.

“Something like that and worse is happening in Castleberry,” Chapman said of the 40-month practice. “It’s some of the most awful examples of misconduct and corruption I’ve seen in my 40 years as a lawyer and 22 years as a prosecutor.”

As a result, Chapman said “hundreds of thousands of dollars” has been taken from innocent people and “some drug dealers weren’t brought to justice.”

Alabama law requires that property seized during the commission of a crime be handled through the civil forfeiture process. Typically, the law enforcement agency’s request is filed with the courts within 30 days of the seizure. A judge then rules on the agency’s request at a hearing. Attorneys allege that process was not followed.

Nix said the town ordinance, which was drafted by Hawsey, allows officers to “act as police and judge.”

“If he says there are drugs in the car, he can impound that vehicle and impose that fee, all without due process,” Nix said. “If you are accused, you should have a chance to defend yourself. These folks never did. It was pay the money or not get your car back.”

Which is the basis for two of the suit plaintiffs whose children’s vehicles were impounded, Nix said.

“Of these seven, several mothers were owners of the vehicles,” he said. “These individuals also had cash money in the car and because police determined – without a judge – that they were carrying drugs, the money was seized. Under law, the officers should have immediately contacted the district attorney’s office and asked them to decide if they should file civil forfeiture action.

“But, Chief Hawsey doesn’t operate that way,” Nix said. “He keeps the money. Clients made written demands for their money back and been refused. We don’t know where that money is, but we’re going to find out. These people will have their day in court.”

• Trey Alexander Crozier of Alabama, who allegedly had $1,750 confiscated following a traffic stop and designated as “proceeds from an illegal drug dealing or activity” on social and print media. The monies were intended to purchase a truck, and Crozier faced no criminal charges as a result of the stop, and no forfeiture requests were filed, attorneys said. Demands for the money’s return have been unsuccessful, the suit alleged.

• Sheri Manaham, Crozier’s mother, who was required to pay the $500 impound fee in cash for the return of her vehicle. No forfeiture request was filed, attorneys said.

• Elmo Florence Jr. and his wife, Denise, of Georgia, who were required to pay a $500 impound fee in cash following a traffic stop.

• Roger Orebauch and his mother, Barbara. The suit alleges on June 16, 2016, $3,800 in cash was confiscated from Orebauch’s vehicle and designated as “proceeds from an illegal drug dealing or activity” on social and print media. No civil forfeiture request was filed, and demands for the money’s return have been unsuccessful, the suit alleged. Ms. Orebauch’s vehicle remains impounded. No forfeiture request was filed, attorneys said.

• Michael Wade of Pensacola, Fla., who was required to pay the $500 impound fee in cash for the return of his vehicle. No forfeiture request was filed, attorneys said.

The non-jury suit is asking for declaratory judgment and damages.

“It’s time for this to stop,” Chapman said. “We believe 10 times the number of people have had this happen to them. It enrages me as an attorney and former prosecutor to think that someone can get away with this.”