Local players sign to play football at next level 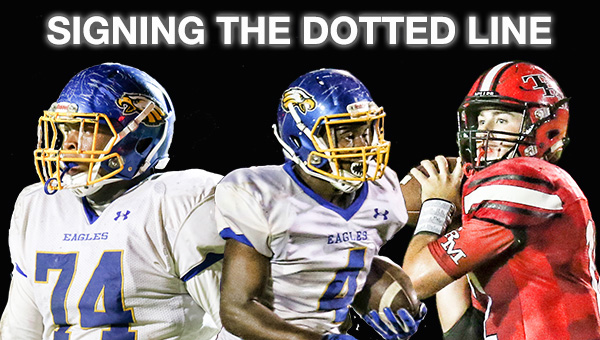 Mitchell and McMillan will make the jump to college this fall. But they won’t make it alone. Both will trek the 1,400-mile trip to join the Norsemen faithful at Mesabi Range College in Minnesota.

WSN assistant coach and recruiting coordinator Jace Gandy said both young men will make a positive impact at the next level.

“I think Mesabi Range is excited,” Gandy said. “They are getting two excellent football players. Both of those guys had tremendous careers at W.S. Neal. They’re very coachable young men and they are hard workers.”

Gandy said Mesabi will play Mitchell at his natural positions of fullback and halfback.

“Jeremiya is versatile. He’s a coaches’ dream. He is also strong in the classroom. I think that willingness to learn and work hard will suit him well in college.”

Mitchell played both sides of the ball his senior year for the Eagles. On offense he had 45 carries for 203 yards and a touchdown. Receiving he had 12 catches for 129 yards. He was second on the team in all-purpose yards.

“It’s an exciting and surreal experience,” Mitchell said. “I’m so excited to have an opportunity to further myself as a player.” 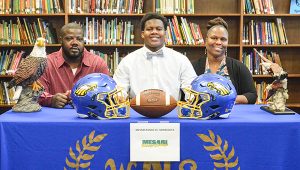 Corey Williams | The Brewton Standard
Mitchell at the signing was his father, Tommy Jeremiya Mitchell; and mother, Okima Jones.

Mitchell said he plans to get his general studies out of the way for the first two years and pursue something else when he transfers to a four year college.

Mitchell is the son of Tommy Mitchell and Okima Jones.

McMillan served as team captain for the Eagles this past season. The 6 foot 3 inch senior served as a steady anchor on the offensive and defensive line for WSN. According to Gandy, McMillan will be slotted in at Mesabi as a offensive guard and offensive tackle.

“Josh has excellent size and athleticism and that will translate to the field well for him,” Gandy said.

McMillan said he can’t wait to get started at Mesabi and that the long trip to Minnesota won’t faze him.

“I’m not worried about the distance. I like to talk,” McMillan said. “This is a great opportunity. I’m glad Coach [Tom Inforzato], it’s his first year in Masabi, I’m just thankful he wanted me. I also want to thank [the late] Darius Tolbert who was a good friend. He’s been a source of inspiration for me.” 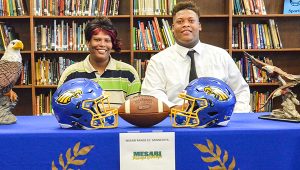 Corey Williams | The Brewton Standard
Josh McMillan and his mother, Hollene Benson at the signing.

McMillan added that he will continue to improve all around to make the transition.

“ I just want to be the best I can be,” he said. “Hopefully I can make the jump to the next level after I’m done.”

McMillan said he is interested in studying nursing or diesel mechanics.

McMillan is the son of Hollene Benson.

Mesabi Range College is located in Virginia, Minn. The college is a part of the Minnesota College Athletic Conference in the NJCAA Division III, Region No. 13.

The TRM senior quarterback made his decision to attend Shorter University official this past Monday with a crowd of family, friends, school faculty and teammates in attendance.

Winton said he’s glad the signing is done and he can move forward to get ready for baseball season and his future at his new school.

Winton made the verbal commitment to Shorter last July. It was at the school he attended a camp where coaches got their first look at the rising senior. The following day he was offered a spot on the team for the 2017 recruiting class.

Winton described Shorter University as a ‘place that feels like home’

“We’re very proud of him,” said his father, Randy Winton. “He’s had this as a goal as long as I can remember. He’s worked hard to make this happen, but none of this is possible without the great people around him. The community has shown him a lot of support. To have that support and encouragement from so many families, former coaches and friends, means a lot. It makes this day even more special for him.” 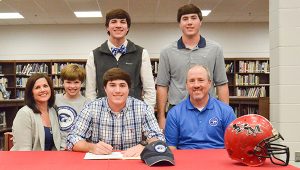 Winton said he’s very appreciative of the love and support in his life.

“I thank Jesus, my Lord and Savior, without him this wouldn’t be possible,” Winton said. “I thank my parents for providing opportunities to make this happen; the coaches who’ve coached me over the last six years in middle school and high school making me a better player. I’m thankful to T.R. Miller for coming out and supporting.”

This past season Winton completed 78-of-147 passes for 1,306 yards and 15 touchdowns. He rushed for 99 yards and five touchdowns.

In his career for the Tigers, Winton has thrown for 3,172 yards, 30 touchdowns and 11 interceptions.

Academically, Winton is currently ranked fourth in his class with a 4.4 GPA in the Honor’s Program.

Winton said he plans to study education at Shorter University to become a future history teacher. He also aspires to serve as a quarterback coach and offensive coordinator for a football team.

He is the son of Randy and Rachel Winton.

His twin brother, Joshua, who played wide receiver for the Tigers, plans to attend Shorter University as well.