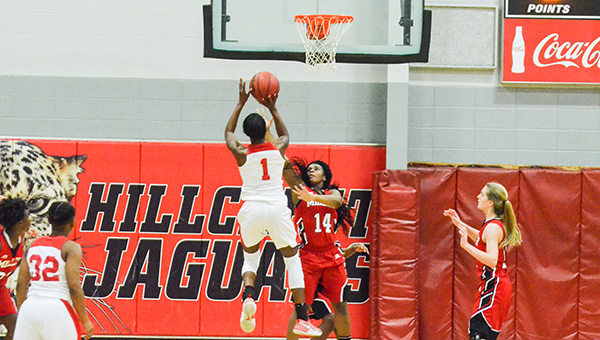 For the third time this year it was the Hillcrest Lady Jaguars who found themselves on the winning end against T.R. Miller. The win was due in large part behind a stellar performance from junior point-forward Tyesha Rudolph who dropped 32 points in the 69-55 victory Thursday.

Hillcrest begin the game sharp with two quick buckets, but Miller responded with seven unanswered points. Hillcrest closed out the first with a 14-4 run. Hillcrest center, Tykeria Merrills had her way in the post scoring 11 points in the quarter.

Hillcrest kept the Tigers at bay in the second quarter, where Rudolph scored 15 points.

Going into the fourth quarter Hillcrest led TRM 52-35. Miller scored five quick points to begin the quarter off a three pointer by Aleria Smith and a basket by Kyla Bell-Barton. The Lady Tigers clawed its way back in the game forcing Hillcrest to take a timeout with a lead of 58-47. Out of the timeout Hillcrest’s Destiny Simpson drained a deep three-pointer to extend the lead to 14. The two teams traded baskets for a couple possessions, but it was Hillcrest getting the upperhand with a dagger three-pointer by Rudolph to make the score 67-53.

Both teams traded free throws for the rest of the game.

Alijah Fountain led Miller with 17 points. Bell-Barton had 14 points. Steely Ruzic finished with 12 points. Smith, who played sparingly due to foul trouble early in the first half, scored seven points.

Merrills finished the game with 15 points. Simpson scored 11 points, nine of which came from behind the arc.

Both teams will advance to subregionals with Hillcrest hosting its first opponent and Miller playing its opponent on the road. Matchups to be determined at a later date.

In Class 4A, Area 2 action, both the W.S Neal boys and girls teams saw there seasons come to an end on Thursday.

The WSN girls were defeated by Monroe County 53-7.