Calhoun to spread message to community 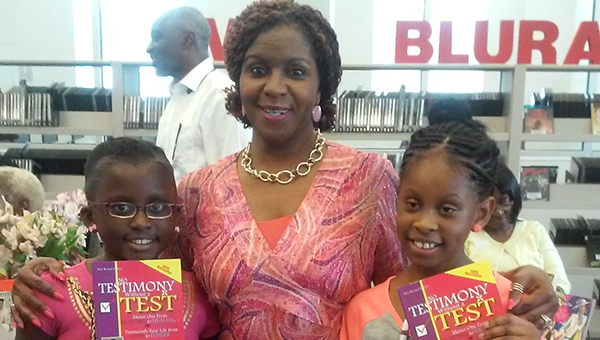 International motivational speaker and Brewton native A. Faye Boykin Calhoun will visit her hometown this weekend for an autograph session of her books; as well as take part in an African American Heritage Program at Baptist Hill Baptist Church.

Calhoun said her visit home is to reach out to the community and empower the future ahead.

“I stand on the tall shoulders of the generations before me,” Calhoun said. “We have to embrace the past, enlighten the present and empower the future. It’s time to celebrate what we are as a town and community.”

Calhoun now resides in Birmingham, but said she has never forgot about her roots.

“I moved out to move up, but I never forgot about where I came from,” Calhoun said. “My heart is still in Brewton.”

Calhoun graduated from Southern Normal in 1978. She went on to earn her degree from Tuskegee Institute (now Tuskegee University) where she graduated with honors in social work in 1981. Calhoun said she is part of three generations of historically black college and university graduates, one of which is her mother, Zenobia Woodson Dale, who earned her degree from Alabama A&M. The 87-year old Dale still resides in Brewton, and Calhoun said she can’t wait to reunite with the person she’s drawn the most inspiration from.

“My mother is my hero,” Calhoun said. “Growing up she reminded her children that you are no less, or no better, but you’re one of the best among the rest.”

Mrs. Dale developed tonsillitis at a young age, and as a result grew deaf. Calhoun said that never stopped her mother from living the life she imagined.

“She made us love the arts. Both she and my grandmother (the late Leona Woodson) loved Billie Holiday. She made us realize that music is a language all in itself. It’s also because of her we grew up in a reading household. To this day, my sister (Glenda Gantt) is an avid reader. My mother made us look up words we couldn’t understand,” she continued. “I would say to the world its because of her serving as a precursor. I’m able to do what I do now.”

As a motivational speaker, Calhoun has travelled from Atlanta to the U.S. Virgin Islands delivering insight and personal testimony.

Despite her parents divorce, Calhoun said she never felt like she lived in a broken home; that her sister and younger brother (the late Arthur Jr.) still were surrounded by plenty of love from relatives.

“My grandparents never wanted us to feel with out,” Calhoun said. “Through them I grasped the entrepreneurial spirit and strong sense of care for the community.”

She said her grandfather, a cattle farmer, had a big impact on her life.

“He would come back home in his 1958 Chevy, weighed down with meat. So much he’d have a lot more than the family needed. He wouldn’t store it, and I asked why. He said ‘When my family has enough, its only right I share it with the community’.”

Calhoun believes in the strong bond of relationships.

Calhoun said coming to Brewton to make a difference in the community she grew up in and still loves today.

“It’s time for us as a community to come together and do things right,” Calhoun said. “There are times I leave Brewton and I am depressed because I don’t see a lot of growth. You can have what you want. You got to access your potential and have faith.”

She said one of her favorite quotes is, “If you want something you never had, you must do something you’ve never done. We must come out of our comfort zone to reach our full potential.”

Calhoun is married to Eric A. Calhoun, J. D., who co-authored her latest book; Help A Sister Out/Help A Brother Out! Can We Meet in the Middle? Together they have a biological son, Joseph, and bonus daughter Asha, who along with her husband Kevin welcomed the Calhoun’s with a grandson, Levi.

Calhoun will be at Baptist Hill Baptist Church on Sun., Feb. 26. A pre-sale and autograph of her books will be from 3 p.m. to 5 p.m. followed by an African American Heritage Program and excerpt reading from Calhoun’s books at 5 p.m. The church is located at 720 Sowell Road.