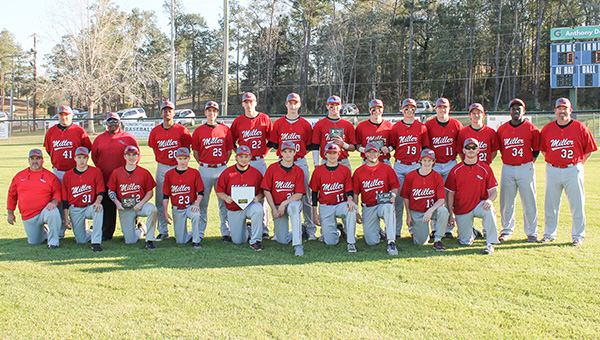 The T.R. Miller Tigers won its fourth straight county tournament title this past weekend in Flomaton. The Tigers combined for 43 runs in the tournament which is the most runs scored in tournament history. The W.S. Neal Eagles secured second place (2-1), with Flomaton placing third (1-2), and Escambia County in fourth (0-3).

Four Eagle pitchers combined for a no-hitter against the Blue Devils on Thursday.

Weston Riddle picked up the win on the mound for the Eagles, pitching three innings with seven strikeouts. Dylan Ingram, Jennings Hobbs and Matt Hutchins came in for relief.

The Tiger offense recorded 15 hits behind a one-hit, seven strikeout performance by Joshua Winton on the mound to secure its first win of the county tournament.

Hayden Hammond suffered the loss on the mound for Flomaton.

Winton picked up the win on the mound, pitching three innings of work and allowing one run. Winton carried a no hitter into the third inning until it was broken up with a single by Flomaton’s Jared Gibbs.

The Hurricanes picked up its first win of the tournament on Friday, keeping a battling Blue Devil team at bay in the bottom of the seventh inning.

A dominating performance on the mound by JoJo Booker and a first inning three-run homerun by Hunter Brittain helped propel the Tigers to its second win of the tournament.

Jacobey Hawthorne was 1-for-3 with a double for the Eagles. P.J. Lovelace was 1-for-2 with an RBI double.

Brittain was 1-for-3, with a 3-run homerun and walk for the Tigers. O’Neil White had two hits and an RBI. Russell Smith was 1-for-3 with two RBIs. Joshua Winton was 1-for-3, which included the walk off two-run double in the bottom of the sixth inning.

Hunter Revel picked up the loss on the mound for the Eagles, pitching one inning and allowing three runs on two hits. Bosarge pitched four innings of relief, allowing six runs, with only one being earned.

Booker was the winning pitcher on the mound for the Tigers. Booker pitched five innings, allowed one run, on two hits and struck out nine batters.

The Tigers scored two runs in the top of the first inning and never looked back, raking up seven more runs through the fourth inning. The Blue Devils threatened in the bottom of the fifth, scoring three runs in due part to two infield errors by the Tigers. Miller rebounded with three runs in the sixth and seventh innings to win its final game of the tournament.

Hunter Brittain was 1-for-2 with an RBI double. JoJo Booker had an RBI single and a double. Russell Smith had two RBIs. O’Neil White had an RBI.

Drew Williamson started for the Tigers and was the winning pitcher.

The Eagles took home a 7-2 victory over Flomaton on Saturday.

Flomaton captured the lead in the second inning off a wild pitch by Jacobey Hawthorne that scored one run.

WSN took back the lead for good with three runs in the top of third inning. Matt Hutchins singled off of Flomaton’s Cole Brown, driving in two runs and Weston Riddle singled to drive in one run.

Hawthorne earned the win for the Eagles. He went seven innings, giving up two runs, five hits, striking out six, while walking none. Brown took the loss for Flomaton. He tossed five innings, surrendering four runs, seven hits, striking out eight and walking one.

The Eagle defense had no errors, while Flomaton committed three. 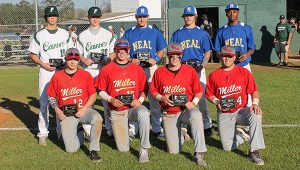