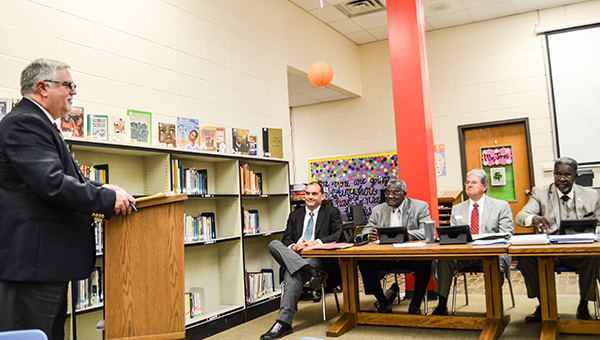 Pollard-McCall principal Stewart Powell was one of four principals from the county to address the county school board this past week. Powell gave a report on Pollard McCall’s progress and current projects and activities taking place with staff and students. Powell also addressed his sincerity towards the board, school and White family, who welcomed him as principal after the tragic passing of former principal Hugh White a couple years ago.

“To his wife, Traci, and family, I can’t say ‘thank you’ enough of how they welcomed me during such a difficult time for their family, school and community,” Powell said. “This is the best job I’ve ever had. I’ve worked at other schools in the past. At those schools I had a laundry list of things to get done. When I came to Pollard it was different. It was don’t mess this up. That’s really a testament of the leadership before me.”

Programs highlighted by Powell were the D.O.R.E. program which helps kids with attention deficit syndrome improve academics, behavior and attendance; and the eMints program which was an $80,000 grant putting a Chromebook in every students hand.

With the Hugh White Memorial now completed the school plans to hold an official ceremony in late March or early April.

Highlighted for it success was the Buck Jones Basketball tournament, which raises money for athletics at the school, and Megan Kirkland who was recently cast as Scout in the Monroeville production of “To Kill a Mockingbird.”