Falco is a real ghost town 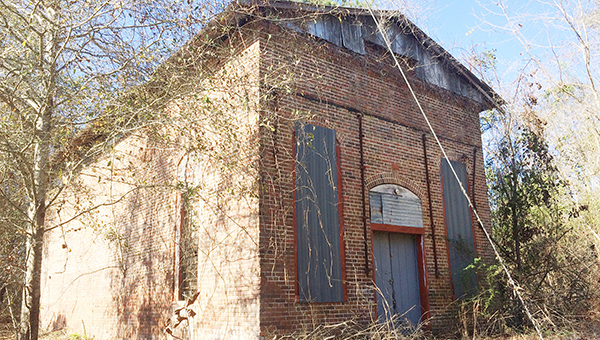 Courtesy photo
The old Falco bank as it looks today.

Most think of the Old West when the subject of ghost towns is raised in a conversation. Old mining establishments, frontier towns and cattle stations along the old railroads of the 1800s bring many to think of romanticized visions of lawmen and desperados waiting on a train.

Yet much less attention is paid to ghost towns in our area. Perhaps it’s because in this climate old buildings and roads quickly fade into the undergrowth and the wicked humidity of our summers rapidly decays old structures and artifacts.

Among the ghost towns in our midst is the forgotten town of Falco, Ala., which existed near the intersection of the Alabama/Florida line and the Escambia and Covington county lines.

Falco owed its existence to the timber industry. The Florida-Alabama Land Company formed and founded the town in 1903 and built a large sawmill at the site. The main investors in the mill were Jesse McLain, Willie Hyer, Mr. Kyser and Mr. Mouldon. The mill was built at Stokes Mill Pond, a large, deep body of water. Soon steel and water would collide in the great millpond to follow.

By the turn of the century the town was in full-bloom. The promise of a new century witnessed stores being built. The town had two deputy sheriffs’ during this period; George Coxwell and Will Hunt.

George later resigned and became a railroad engineer on the first train to come to Falco. The train was known as the “Peg Leg.” This train ran from Falco to Galivar, Fla., every day. The railroads were linked with the Horseshoe Lumber Company, which were connected to the Central of Georgia and the L&N Railroad.

John David Lee worked as a blacksmith as the mill gained in importance with the local economy.

Soon the town was surveyed and streets were carved out of the woods and named. The new town incorporated, and Hilary Thompson was the first mayor. The Post Office was established in 1903. John W. Davis was the first postmaster. He was succeeded by Dennis D. Miles, who was followed by Henry Albert Cross.

Among the businesses that soon served the town was the bank. A nickel was placed between the bricks on the groundbreaking day and this was done, according to locals, so that “even if the bank went belly-up, it would never run out of money.”

Some of the other businesses in the town were Hamp Thomas Grocery, Wilkes Grocery, McLelland Grocery, Dan Brunson’s Store, Balkom Grocery, a large meat market and an ice house.

Other industries soon settled in the town. The Falcola Bottling Company was established during the early 1900s by Dan Stokes. The company bottled soft drinks and delivered to surrounding communities in several counties by mules and wagons.

Due to the rapid influx of people into the mill town a hotel was soon built. The Falco Hotel had 40 rooms. A long, gigantic wooden porch ran long the front of the hotel. Mrs. Garrett, Mrs. Hicks, Mrs. Shaw and Mrs Ola Hamby are some of the women who ran the hotel over the years.  Many a weary traveler and perhaps more than one highwayman stayed under their roof. Many new residents looking for a fresh start would have found sleep in their rooms.

The Falco School was located on the east side of Falco. In the years 1902-1903, Mrs. Lizzie Peoden Howell taught as the first teacher. Later the school grew to a three-teacher school.

Next week, we’ll take a look at Falco’s future.

Remember – “Clocks slay time. Time is dead as long as it is being clicked off by little wheels; only when the clock stops does time come to life.” – William Faulkner, The Sound and the Fury.