Godwin is Citizen of the Year 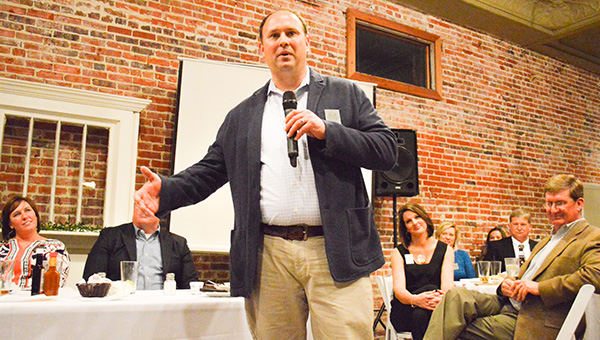 Josh Godwin of David’s Catfish House and Popeye’s Chicken was named the 2017 Greater Brewton Area Chamber of Commerce’s Citizen of the Year.

Godwin, who was introduced by fellow chamber director Matt Sasser, began business in Brewton in 2004 and became a partner in 2006. In 2008, he began managing the Brewton location of David’s Catfish House, and then, in 2012, became the sole owner. Currently, Godwin helps to employ more than 100 employees in Brewton and at Atmore’s David’s Catfish House.

“If you encounter someone that has served alongside (Godwin), they will rave about his service, his work ethic and his commitment to serve Brewton,” Sasser said. “He is also the man who won’t say anything but there are so many instances where he has helped those in the community without the publicity that many often seek.”

Godwin currently serves on the board of directors for the Brewton Area YMCA, the Coastal Alabama Community College Foundation and is in his second term on the chamber board.

“(Godwin) isn’t a lifelong resident of Brewton, but he has contributed to the Brewton area for many years and plugged into the community wholeheartedly,” Sasser said. “We know small towns aren’t easy to infiltrate, but (Godwin) worked to figure out what he could do to make Brewton better. He did not have that obligation, and we are especially thankful for those like him.”

Godwin was overcome after the announcement.

“I can’t say thank you enough,” Godwin said. “I don’t think that I deserve this (award), but I am eternally grateful to be in Brewton.”

The award presentation ended the night made special by a presentation by Mike Lutzenkirchen, who shared his “Lessons from Lutz.”

The Lutzenkirchen name is well known to football fans as his late son, Phillip, a former Auburn tight end who was a multiple-year starter and member of the championship-winning team in 2010. He was tragically killed in a one-vehicle alcohol-related accident in June 2014. 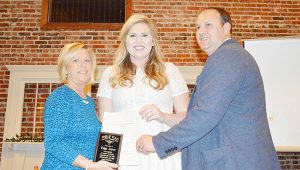 Since Philip’s death, Lutzenkirchen has been sharing his son’s story with college students and youth groups across the country to convey important lessons about alcohol misuse, seatbelt safety and the lasting impact of life choices. Earlier Tuesday, Lutzenkirchen shared the message with seniors from the area’s four high schools.

“Be an example to your children,” Lutzenkirchen said. “At the end of the day, the message is be so great that you can be counted on.”