A Flomaton man has been arrested after he allegedly kidnapped and threatened his ex-girlfriend with a machete.

“When officers arrived, they could not locate either Cofield or his victim,” Davis said. “We believed they were on foot in the area, so we called for assistance by the K-9 tracking team.” 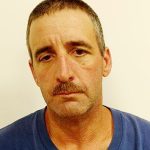 Assisted by a number of local agencies, Davis said the search encompassed the area and a number of homes before finding the woman off Ala. Hwy. 31 just after 10 a.m.

“She reported she had been held against her will for several hours and that Cofield fled on foot before officers arrived,” Davis said. “She was visibly shaken, but uninjured.”

Davis said the K-9 tracking team from the Alabama Department of Corrections picked up Cofield’s trace near Wiley Drive in Flomaton in the area of Pecan Grove Trailer Park.

“Officers searched for several hours, and we believe Cofield was picked up by someone,” Davis said.

“At 4:53 p.m., a family member brought Cofield in to turn himself in, and we later learned that he caught a ride to Florida,” Davis said.

He was booked into the Escambia County Detention Center.