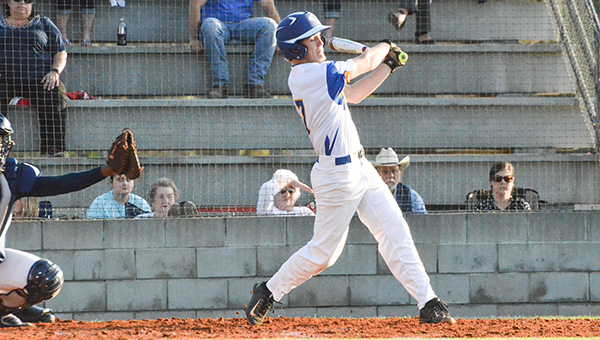 Corey Williams | The Brewton Standard
Weston Riddle follows through on a solo home run in the second inning. Riddle also had two doubles in the win.

W.S. Neal had its way against area rival Monroe County on Thursday, putting together 13 hits behind a four inning, nine-strikeout performance by Weston Riddle.

The Eagles began the assault in the first inning, scoring four runs. Jacobey Hawthorne got the inning going on a double down the third base line. Later in the inning, Riddle doubled to left field to score two runs. A fielder’s choice and pass ball scored the Eagles third and fourth run of the inning.

In the bottom of the second inning the Eagles picked up another run before Riddle helped his cause at the plate again, belting a home run to left field to extend the lead to 6-0. Kristian Taylor added an RBI single to make the score 7-0 at the end of three. 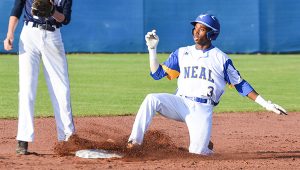 Corey Williams | The Brewton Standard
Hawthorne slides into second base safely after a lead off double in the first inning.

A single by Aaron Bosarge, double by Riddle, triple by Matt Hutchins and wild pitch pushed the lead to 11-0 in the third inning. In the fourth inning Hawthorne knocked in a run on a single, his fourth hit of the game. He later scored on an infield error. Monroe scored its lone run in the fifth inning off a balk to score Erikston Kidd, who reached base on a walk earlier in the inning.

Hawthorne had two singles, a double, a triple, RBI and a stolen base from the lead off spot for the Eagles. Riddle was 3-for-3, with the home run and two doubles, good for four RBIs. Hutchins was 3-for-4 with two RBIs.

C.J. Booker and Dallas Stabler had the only hits for Monroe.

Riddle pitched four stellar innings of work, throwing 67 pitches, 40 of which were strikes.

Dallas Stable suffered the loss on the mound for Monroe, allowing 13 runs on 13 hits, six walks, and striking out two batters.

With the win WSN improves to 4-3 for the season.

The two teams will matchup today in Monroeville for a double-header beginning at 4 p.m.