Tigers win both in doubleheader versus Davidson 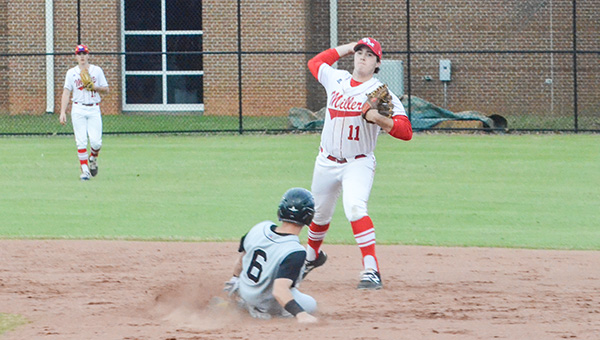 The T.R. Miller Tigers improved to 9-0 for the season after taken two games in a doubleheader versus Davidson on Saturday.

The Tigers found themselves playing catchup early on in the game after a couple hits by Davidson and a couple of errors by the Tigers in the first. With the Tigers down 3-0, Jo Jo Booker doubled home a run. Davidson added a run in the top of the second. In the third inning with two runners on, Booker connected for a three-run homerun over the left field fence to give Miller a 5-4 lead. The Tigers loaded the bases in the fourth inning and scored three runs on a two walks and a hit-batter. Davidson scored its final run of the game in the fifth inning off a fielder’s choice.

Russell Smith picked up the win on the mound, tossing the complete game. Smith struck out two batters and walked two.

Miller got on the board in the first inning with a bang when Drew Williamson crushed a line drive off the Tiger Field scoreboard for a solo homerun. Davidson added a run in the top of the second off a single. An RBI single by Jordan Williams gave the Tigers the 2-1 lead, a lead in which they never relinquished again. Miller added a run in the third on a pass ball, a run in the fourth off an RBI single by Jo Jo Booker, three runs in the fifth, and three runs in the sixth.

Williamson led Miller on offense with two hits and a steal. Jo Jo Booker had two hits, including a triple. Russell Smith had an RBI. Stokes Jennings and Jason Konsler had a hit.

Joshua Winton pitched the complete game. Over seven innings of work Winton was efficient, throwing 58 pitches and striking out three.