Marshal’s murder created quite the stir 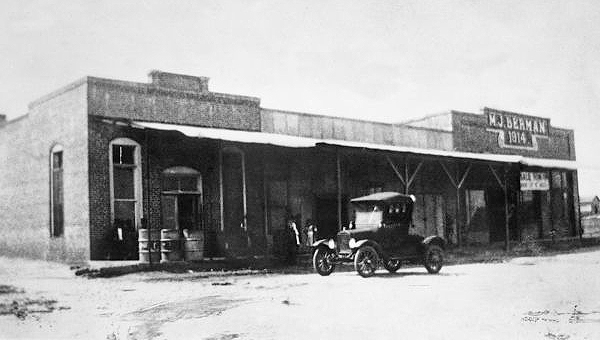 By 1914 the golden age of Falco was in full swing in southern Covington County. The town incorporated in 1912 and at the first city council meeting William Josiah Hart was chosen to be the first marshal of the town. Mr. Coxwell had also served as a marshal before the town incorporated but had resigned to take a job with the railroad.

The young marshal surely looked forward to the prosperity of a growing town and the wife and children he had at home as a bright and shining star of things to come.

Yet as the town grew, so too grew the challenges to those peace-loving citizens who only wished to raise a family, work an honest job and worship God on Sundays at church. As mentioned in last week’s article, mothers warned their children to stay off the streets and out of downtown on the weekends due to the rowdy mill workers who had their week’s pay in hand and some of whom would find themselves in legal trouble due to demon rum and whiskey.

It was into this mix that the town’s new marshal found himself on May 31, 1914 when Hart and his brother Reuben took on the tough but fair job of serving papers on Albert Pryor and his wife Norah for selling whiskey illegally.

It was Sunday afternoon in Falco as the two brothers approached the home of the two alleged bootleggers. From inside the dwelling a shot rang out as Albert Pryor killed Marshal Hart and fatally wounded his brother.  The Andalusia Star from June 2, 1914 held that the killing of the marshal and wounding of his brother created quite a stir.

As the townspeople were caught up in the recent violence in their quiet town, few noticed the newspaper articles recounting the far away assassination in Europe of Archduke Ferdinand in Sarajevo later in June.

Some townspeople quickly sought to hang the husband and wife who had killed their beloved marshal. Calmer heads called for the sheriff to come from Covington to prevent a lynching.

The Montgomery Advertiser wrote; “With the sheriff and his entire force of deputies in full charge of the situation, the little town of Falco is fairly quiet tonight following the murder of town marshal Will Hart and the fatal injury to his brother, Reuben Hart by Albert and Nora Pryor Sunday afternoon. The officers have coped with all threatening mob violence to the prisoners so far but more trouble had been feared hourly.”

The New Orleans Item made note of the situation in Falco as well: “Albert Pryor and his wife, Nora Pryor, both negroes, are in jail at Falco, surrounded by the sheriff and his entire force, to prevent a lynching for the murder of Will Hart…”

The New Orleans Item added, “When the negroes were arrested an attempt was made to mob them, but officers succeeded in safely landing their prisoners in jail. Threats have been made to lynch the negroes, but the sheriff and his officers say they are able to prevent such violence. A special grand jury will be summoned to try the negroes. Will Hart leaves a wife and four young children.”

Tucked in between news of the mobilization of European armies for World War I, the news of the events in Falco reached newspapers as far away as North Dakota.

News reports show the townspeople continued to be up in arms over the murder. Pryor was set for trial on Aug. 24, 1914 in Andalusia.

Although he was presumed innocent until proven guilty, the court of public opinion had already made up its mind based upon an article in The Montgomery Advertiser, which stated:

“Judge Albritton assured the citizens of that town that the defendants would be given a trial at the August term of court and the lynching clouds passed over. It is freely predicted that Covington county will have a legal hanging after these defendants are tried.”

At the last minute before trial, Pryor pleaded guilty and was sentenced to life. He was sent to a lumber camp to work as a convict at River Falls. He was paroled on January 20, 1926 and moved his family to Brewton where he died in 1934. Reuben Hart is believed to have recovered from his wounds.

The people of Falco returned to work although the thoughts of the untimely demise of their town marshal surely weighed on their minds.

Next week: “Pardon Me, Is This The Way To Falco?”

Special thanks to Jerry Simmons for use of the book, Those Special Memories of Falco, Beda and Wing, Donald Cotton of Andalusia and John Jackson and his wife, Mary, of Wing.