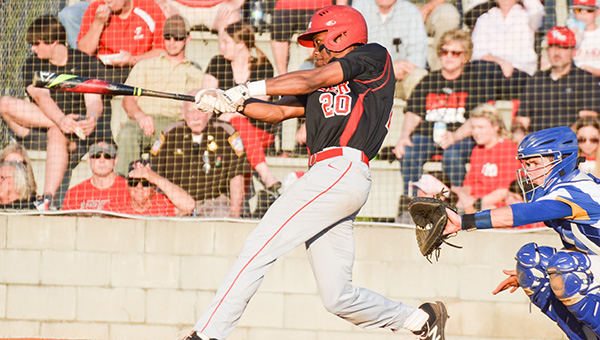 The T.R. Miller Tigers improved to 14-0 after defeating cross-town rival W.S. Neal 13-1 on Tuesday. Drew Williamson kept on his hot streak at the plate belting two home runs, making a total of four in the last two games and six in the season. Leadoff hitter Jordan Williams was 2-for-4 with a double and 4 RBIs. Joshua Winton was 2-for-3 with a double and 4 RBIs. Russell Smith was 3-for-3 with an RBI.

Weston Riddle and Aaron Bosarge had the only hits for Neal. Riddle’s hit came on an RBI single in the third inning.

Jacobey Hawthorne was the losing pitcher for Neal. Hawthorne gave up 10 runs, on eight hits and three walks. He had five strikeouts, three coming in the first inning.

Russell Smith was the winning pitcher for Miller. Smith allowed one run on one walk and two hits. He had two strikeouts.

The loss drops Neal to 8-4 for the season. The Eagles will play Pensacola Christian at home Thursday. First pitch will be at 4 p.m.

The Tigers will travel to play Excel Thursday. JV will play at 4 p.m. followed by the varsity.

In JV action, both TRM and WSN split doubleheader games on Monday. Miller won game one, 1-0. Matt Smith picked up the win on the mound. Smith also led the Tigers at the plate going 2-for-2 with an RBI. Hayden Winchester had a hit for Neal.

The Eagles won game two, 1-0. Bradley Lowery was the hero for Neal, ending the game with a walk off single to score Caleb Briggs.

TRM’s Drew Reed and Landon Sims had a hit for Miller.