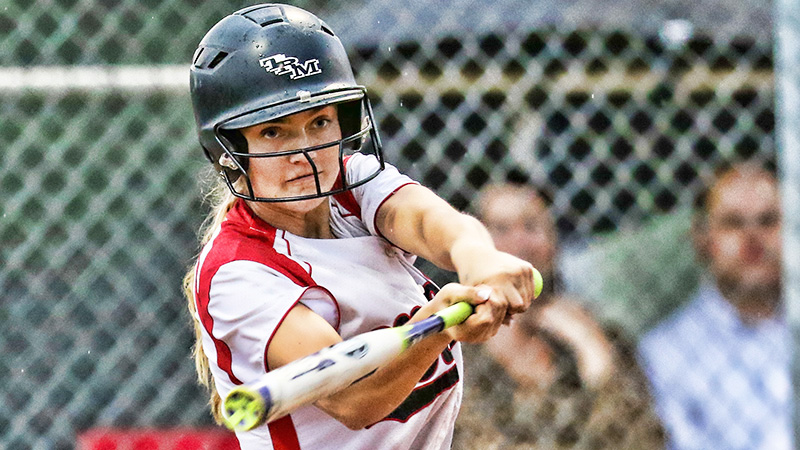 Ronnie Knowles | Down South Photography TRM's Steely Ruzic gets a hit versus Hillcrest.

The T.R. Miller Lady Tigers softball team defeated Red Level 16-0 on Fri., March 24 to earn its 10th victory of the season. Miller was shutout by Brantley earlier in the day, 6-0. 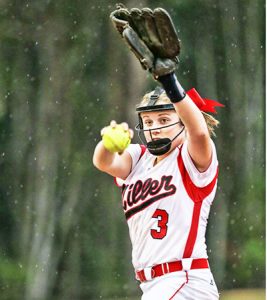 Myra Reiss had the lone hit for Miller. Leanna Johnson for Brantley shutdown the Lady Tigers striking out 13 batters. Taylor Austin was the losing pitcher for TRM. Austin allowed six runs, on seven hits, three walks. She had one strikeout. Alexis Wilcox led Brantley at the plate with a home run and 3 RBIs.

Pitcher Myra Reiss was strong from the circle striking out six Red Level batters in the win. Sailor Smith led Miller at the plate with two hits and 3 RBIs. Myra Reiss, Taylor Austin and Mary Madison Brown each had 2 RBIs. Mallori Floyd had a double and an RBI. Kate Najor had an RBI. Anna Grace White and Morgan Longmire both had a hit and scored a run.

On Thurs., March 23, TRM defeated area rival Hillcrest 15-0. Anna Grace White pitched the complete game shutout for the Lady Tigers. In her support the offense accumulated 14 hits. Steely Ruzic was 3-for-3 with three runs scored and 3 RBIs. Myra Reiss was 2-for-4 with a double and 3 RBIs. Taylor Austin was 2-for-3 with a triple and an RBI. Mary Madison Brown had a triple and 2 RBIs. White had two hits and an RBI. Morgan Longmire had a triple, RBI and scored two runs.

The Lady Tigers will play at Flomaton on Tues., April 4, with the JV beginning at 4 p.m. followed by the varsity squad.