Prison bill could have local impact 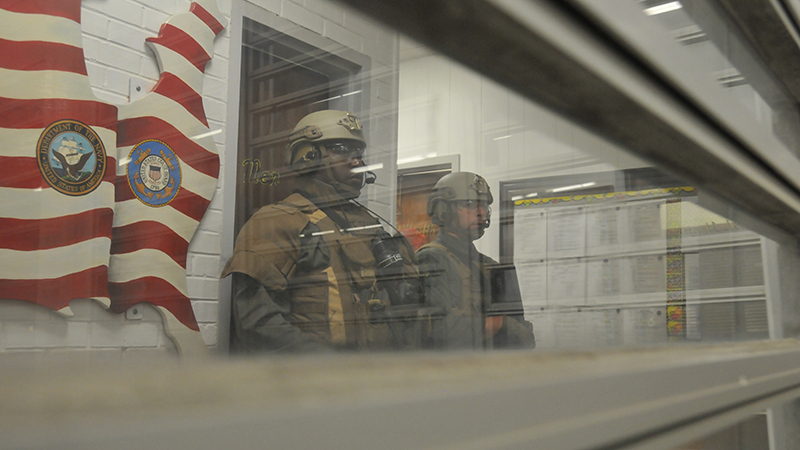 File photo Under-staffing at Atmore’s Holman Prison was one of the contributing factors to a March riot. Here, guards stand at attention during Gov. Robert Bentley’s visit last year.

A proposed prison construction bill making its way through the Alabama legislature could have huge implications for Escambia County, Sen. Greg Albritton said.

The Alabama Senate approved SB302 before the legislature adjourned for spring break, and has been sent to the House.

Introduced by Sen. Cam Ward (R-Alabaster), the bill is a retooled version of legislation originally proposed by Gov. Robert Bentley last year.  That version called for $800 million in new prison construction, shuttering most of the state’s prisons and building four mega-prisons in not-named locations.

Ward’s version limits the state’s construction to one new prison, and calls for requests for proposals (RFPs) from local governments willing to form authorities and borrow up to $225 million to build prison facilities.  This version would calls only for three men’s prisons, and does not replace the state women’s prison. If approved, the legislation also would close all but two of the state’s existing men’s facilities – two of which – Fountain and Holman prisons – are located near Atmore.

The state in turn would lease the facilities from the authorities formed to build them, and ownership would eventually transfer to the state.

Albritton (R-Range), whose district includes Escambia County, supported the legislation. And while he thinks a local authority willing to work with the prison system to build one of the new facilities here would have a good chance of approval, the process would be an uphill battle, he said.

Even though it is unknown how the legislation will fare in the House, already, area officials are discussing the potential impact of the bill.

Albritton said any “partnership” to build a new facility could come from a combination of any of those counties and their municipalities; however, Staff echoed the concerns of lawmakers who say the bill is still too vague, with no mention of possible locations or what prisons could be shut down.

Proposed prison sites must meet a number of qualifications, including encompassing communities where two or more major prison facilities are currently being operated by the department and having at least 200 trained correctional officers reside within a 75-mile radius.

“Not being part of new construction would almost certainly mean the end of Fountain and Holman prisons,” he said. “We don’t know that for a fact; however, Fountain was built in 1952, and Holman is the next problem area.

“If no bill passes, there will not be a change,” he said.

And that fact alone, Albritton said, has led some to say he should not be supporting a bill that could risk job losses in his districts.

“In one sense of the word, the best thing I could do, would be to not do anything; just to keep the status quo,” he said. “But we’ve already had the third guard that’s been killed at Holman and several stabbings, so I don’t believe that doing nothing is the right thing to do.”

Albritton said there could be much more at stake than just losing two prisons and the jobs that go with it.