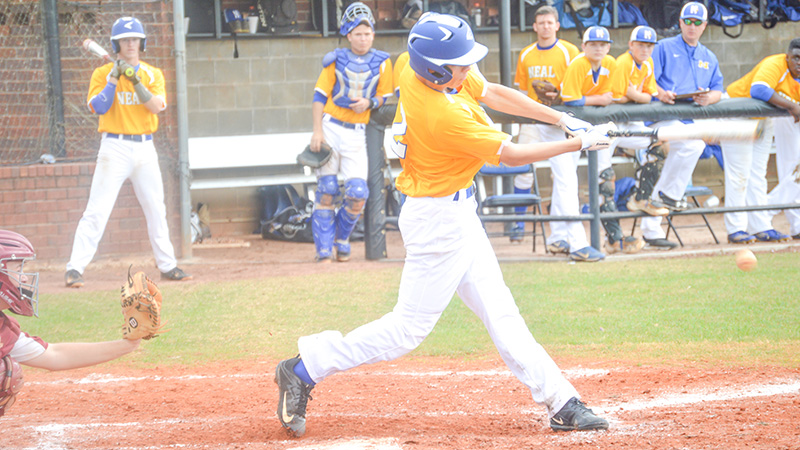 The W.S. Neal Eagle baseball team completed tournament play in Opp Tuesday with a 4-0 win over Geneva. Earlier in the day Neal lost to Andalusia after winning its opener the day before versus Straughn. After the tournament, WSN improved to 11-5 for the season.

A lead off walk in the bottom of the seventh inning came back to haunt Straughn. Neal eventually loaded the bases. With the game tied 8-8, and two outs, Weston Riddle stepped to the plate. Straughn pitcher Matt Worley got ahead with a 1-2 count. Riddle answered under pressure with a line drive single to center field to score the winning run. Riddle finished the game with two hits and 2 RBIs. Jacobey Hawthorne was 3-for-4 with 2 RBIs. Aaron Bosarge and P.J. Lovelace had two hits each. Lovelace had an RBI. Matt Hutchins was 2-for-3 with a double and an RBI.

Clay Ashberry was 3-for-4 with 2 RBIs to lead Straughn at the plate.

Hawthorne was the starting pitcher for the Eagles in a no decision. Hawthorne surrendered six runs, two earned, on seven hits and two walks. He had six strikeouts. Bosarge and Hutchins came in as relief of Hawthorne. Hutchins picked up the win.

The Bulldogs scored two runs in the first inning and never looked back. Will Clark was solid at the plate going 3-for-5 with a home run and 5 RBIs. Hogan Nichols was 4-for-5 with two doubles and 2 RBIs. Ethan Wilson was 3-for-5 with a double and 3 RBIs. Neal had six hits. Weston Riddle and Hunter Revel each had a hit and 2 RBIs. Revel was the losing pitcher for Neal. Jacob Cravey picked up the win on the mound for the Bulldogs.

Weston Riddle was nearly unhittable on the mound for Neal. Geneva’s Tyler Stevenson got Geneva’s lone hit in the fourth inning. Riddle finished the game with seven strikeouts and five walks. Jacobey Hawthorne was 2-for-4 with a double and an RBI at the plate. Matt Hutchins had 2 RBIs.

WSN will play at Excel on Mon., April 3 beginning at 4 p.m. with the JV, followed by the varsity team. Neal varsity will play at T.R. Miller on Tues., April 4 at 5 p.m.