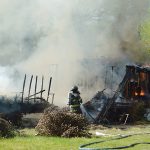 Brewton Fire Department Chief Jeffery Salter said the fire at the unoccupied doublewide mobile home was initially thought to be a brush fire.

“But, when units arrived, the home was engulfed,” Salter said. “It appears that work was ongoing at the home as it was set to be moved tomorrow. It’s unfortunate, but is also a prime example of how easily a fire can get away from you.”

The BFD was assisted by members of the Appleton Volunteer Fire Department.