Johnson named Coach of the Year 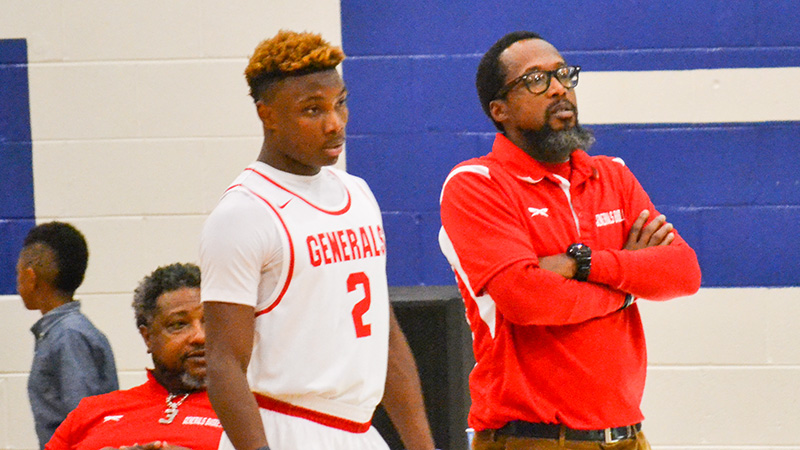 Lee High head basketball coach Bryant Johnson with senior Henry Ruggs III. Johnson is 221-124 in 12 season at the school. He graduated from T.R. Miller in 1990.

“I’m surrounded by a great group of athletes and coaches,” Johnson said. ”Being honored with this award highlights my family and friends and anyone who has ever helped me in my childhood. This honor means a lot, and I share it with all of them.”

The 2016 season came with its challenges for the Generals. Lee lost two of its leading scorers to graduation, but the biggest blow came off the court. Star at Lee and Jacksonville State commit Rod Scott died in March 2016 due to injuries sustained in a car accident.

“It’s been kind of a numb feeling for us,” Johnson said to The Montgomery Advertiser at the time.

“Good moments and bad moments because you remember (Scott) for who he was, and he was a great young man who had a great spirit, and he left those lasting feelings on us.”

Johnson graduated from T.R. Miller in 1990. While at Miller, Johnson lettered in basketball, football, baseball and track. He went on to graduate from Troy University where he played basketball. It was at Troy he played guard and as a player advanced to the Division II national title game in 1993.

“Brewton has always held a special place in my heart,” Johnson said. “It’s been good to me, and I hope to represent the city proudly.”

He is the son of Nora Johnson and William Thomas, and is the nephew of  the beloved TRM icon, Andrew “Zeke” Johnson.

The tale of Flomaton train robbery