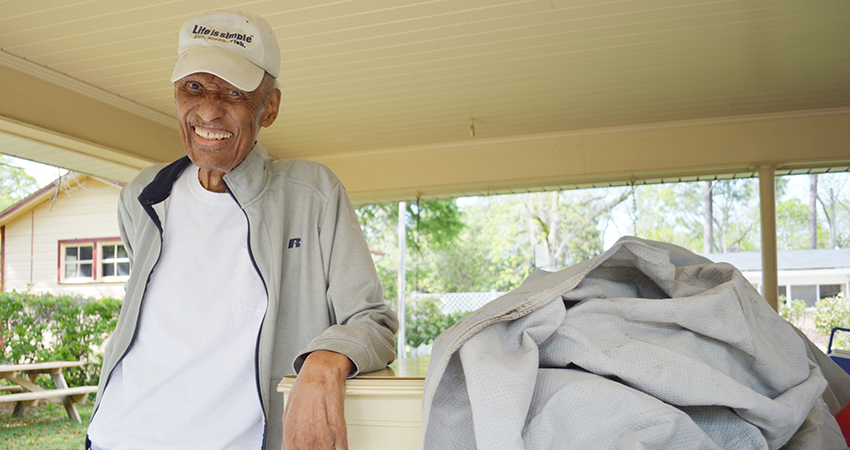 Arthur Wills takes a break from organizing items from his late sister’s estate Monday, all of which will be on sale at his Brewton home this weekend.

Their stories are told on pages of newsprint – his, the proof of big fish tales in Florida and his sister’s, of an amazing 75-year career at one of the oldest family-owned retailers in not only Alabama, but also in the U.S.

In Brewton, their stories were discovered when Arthur Wills visited the newspaper office looking for a classified ad to advertise a yard sale.

Wills, a totally disabled Korean War veteran and avid fisherman, said he was drawn to Brewton in 1998 because of its 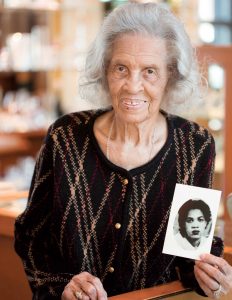 The late Frances Moore, shown here in a family photo, made national headlines when she retired from a 75-year career.

proximity to the Gulf.

As he gave details for his ad, he revealed a fascinating story.

It was 1939, and he was eight years old when his sister, 18-year-old Frances Moore, began working at Birmingham’s Bromberg & Co. Established in 1836, the fine jewelry and giftware store welcomed Moore.

There, she put family lessons of honesty and hard work into practice, and soon became a treasured member of the staff.  Over the years, she worked every facet of the business – from giftwrapping to eventually managing the company’s inventory.

When “Miz Frances’ retired in 2015 at 93, she had long since transitioned to family for those inside the company, Wills said.

“She started polishing the silver, and when she left, she left with diamonds,” Wills said of his sister’s career. “Everyone loved her, and I loved her.”

Pride and love for his sister – and her accomplishments – are evident as Wills shares his sister’s story is illustrated by news article clippings from the Associated Press, The L.A. Times and numerous magazines from his Belleville Avenue home.

“Now me – the only times I made it into the paper is when I caught these big fish,” Wills said, chuckling as he points to photographs of memorable blackfish tuna and red snapper hauls printed in north Florida newspapers.

“When her story came out, it went everywhere,” he said of his sister’s amazing career.  “When the AP got it, it just went – overseas, Canada, other countries. It was just amazing.

“But, she was so much more than her career,” Wills said. “She was not a great cook, but boy could she bake – and sew. That woman could sew anything. She was just something.”

Moore passed away in September 2015. Since then, Wills and other family members have worked to clear her estate.

“Frances had a lot of very nice things,” Wills said. “We had an estate sale in Birmingham but decided we wanted to bring the rest back here.

“She saved everything, and now, it’s time to find her things a new home.”

With help from his Baptist Hill Missionary Baptist Church family, specifically Butch Preyor, the many hauls from two of Moore’s Birmingham homes will be on display this Saturday and Sunday beginning 9 a.m. at 1513 Belleville Avenue. On sale will be silver, artwork, furniture, glassware, collectibles and more.

“These are things that were special to her, and now, I hope they can become special to someone else,” Wills said.