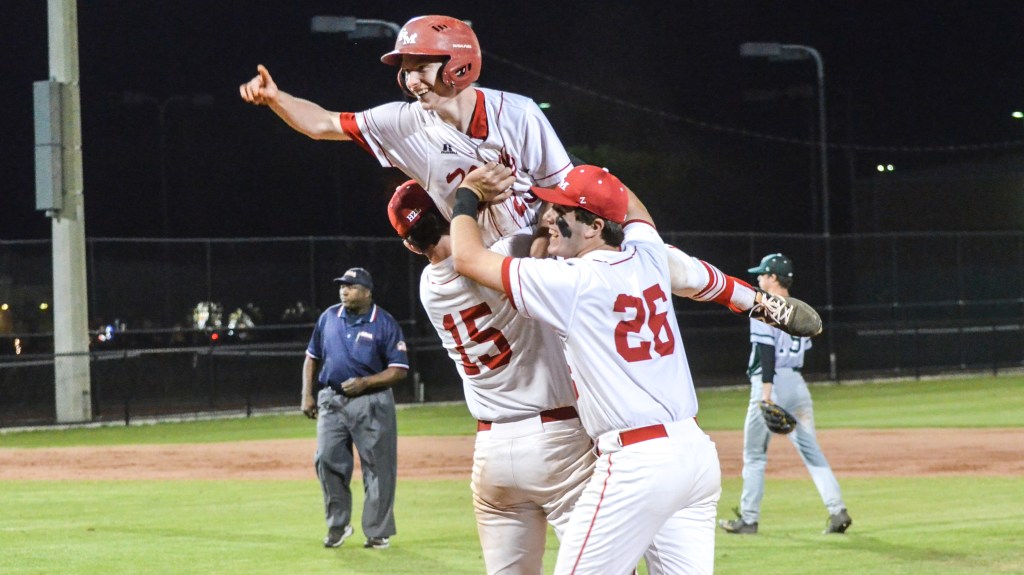 Corey Williams | The Brewton Standard T.R. Miller's Baylon Parker is hoisted up by teammates after the Tiger's second win of a doubleheader against Flomaton on Friday. The win completed a three-game sweep.

The T.R. Miller Tigers completed a sweep of area opponent Flomaton on Friday, defeating the Hurricanes in game one, 14-0, and game two, 15-5. The Tigers defeated Flomaton on Thursday, 13-1.

Joshua Winton secured the win on the mound. Andrew Etheridge closed out the game in the fifth inning.

Miller opened up its final game against Flomaton with four runs in the first inning. Hunter Brittain connected for a double with the bases loaded to score two runs. Russell Smith connected for a sacrifice fly to make the score 3-0. A pass ball made the score 4-0.

After adding a run in the second inning, Miller scored six runs in the third and three runs in the fourth inning to make the score 14-0. Flomaton added a run on an RBI single to right field by Zachary Brown. The Tigers put an end to the game in the bottom of the fifth inning when a ball hit sky high by Baylon Parker to the pitcher was misplayed to score the winning run.

William O’Bannon was the losing pitcher for Flomaton. O’Bannon allowed 11 runs, on 11 hits and three walks. He had three strikeouts.

Miller improves to 25-1 for the season. The Tigers will play at Northview on Mon., April 10, with JV playing at 4 p.m., followed by the varsity.