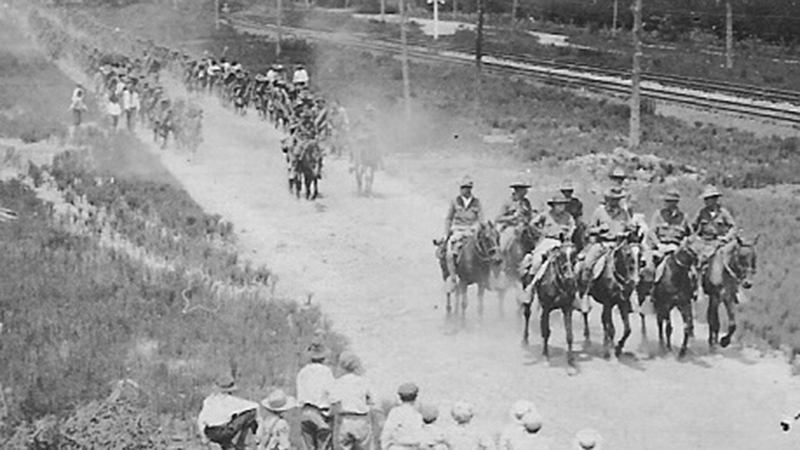 Volumes could be written on the history of Escambia County’s roads and bridge – if one had the time and effort to do the research.

During the War Between the States, the two best-known roads were probably the Wolf Trail and Old Federal Road, yet these were by no means the only way to get around.

The Fort Montgomery to Fort Crawford Road, which was situated high on the east bank of Murder Creek, was another major transportation artery. Another Fort Crawford connection was the Fort Crawford to Fort Gaines Road. Numerous pig-trails and back woods roads cut through the interior of the county and connect isolated rural communities.

Some ancient footpaths through the county were no doubt the result of Native American trade routes to other parts of the region. Arrowheads and other artifacts are sometimes found which are made of different types of rock than what we have locally which indicate the presence of a well-developed trade network which relied on foot paths through the pine forests and swamps of the county.

By the end of the War Between the States, the area was poised to begin a dramatic growth spurt, which forever changed the landscape and made some men very wealthy. Often known as the “Big Cut,” it was a period of time when the virgin forests of our area were harvested for their timber resource and their turpentine (also known as naval stores).

The timber and turpentine industries required better roads to transport goods to the railroads and the ports of Mobile and Pensacola. Almost immediately the local county governments of the area responded with an ambitious road-building project unlike anything that had been seen in the area.

By the early 1870s, numerous “settler roads” were springing up in the wilderness. Local settlers would follow the path of least resistance through the woods in building roads to their communities. The Sardine community had such a road that meandered through the woods yet the exact route is lost to history. Another crossing would have been at Sizemore Creek Bridge and a little further east down-stream was a ford, which was near a turpentine camp. The remains of this turpentine camp could be seen at least as late as 1988.

County commissioners ordered that a new road be surveyed from Evansville, Ala., (at the present location of Bowman Cemetery) along the railroad to the Baldwin County line, going by way of Canoe Station and Williams Station. The survey was completed in August 1881 and the new road construction began.

A steel bridge was at some point built along Big Escambia Creek somewhere between what is now Magnolia Branch and Murray Branch Road. Generations of inter-tubers have floated past the pilings of the bridge, which may have been either an old county road bridge or the Alger Sullivan Railroad trestle.

One of the first bridges in the county was the Murder Creek Bridge, which was built in 1824 by the soldiers when the Three Notch Road was constructed. That bridge was destroyed in November 1864 and replaced in 1872. A flood in August 1881 caused nearly all bridges in the county to be in need of repair. Escambia and Monroe counties collaborated to build a bridge between the two counties at Manac Ford on Little River.

At one point in time a ferry operated across Big Escambia Creek somewhere near present-day Flomaton. It was operated by Andrew Noles and known as the Noles Ferry. It was located in Section 28, Township 1N, Range SE. By 1873, it was apparent that a replacement was needed for the ferry. Therefore in April 1873 the county commission appropriated $200 for the purpose of examining a site near Miles Crossing in Section 11, Township 1N, Range 7E.

The county commission eventually appointed W.H.H. Leatherwood and E.P. Loveless, to select the location for the new bridge in November 1880. Bids were submitted by August 1886. W.V. Jernigan and W.A. Snowden were the low bidders at $586. The bridge became known as the Noles Bridge.

Other structures would eventually replace the Noles Bridge as technology and construction techniques improved.

To illustrate that, look at some of the bridge contracts from the era. Around December 1916, the construction of a new bridge was contemplated for the crossing at Big Escambia Creek. J.H. Scruggs Construction of Birmingham is mentioned in the contract for the new steel and concrete bridge.

The contractors to build the bridge were required to have an $11,000 bond, and they were to be paid as the work progressed. The company was to be paid $2,000 when all pilings were driven and all columns were up above the waterline. When all of the bridge building materials were delivered and following the completion of the bridge, the contractor was due another $2,000. Finally, when the bridge was completed, a $1,500 “warrant” (perhaps a form of bond) was to be issued, bearing 5 ½ percent interest from the date of delivery until the date of maturity date of Jan. 1, 1918. Contract for the project was placed with the Escambia County Judge of Probate, W.E. Rushing.

As we drive over the bridges and roads of our day, it is good to remember that the history of many of the bridges we cross go way back beyond our own generation.