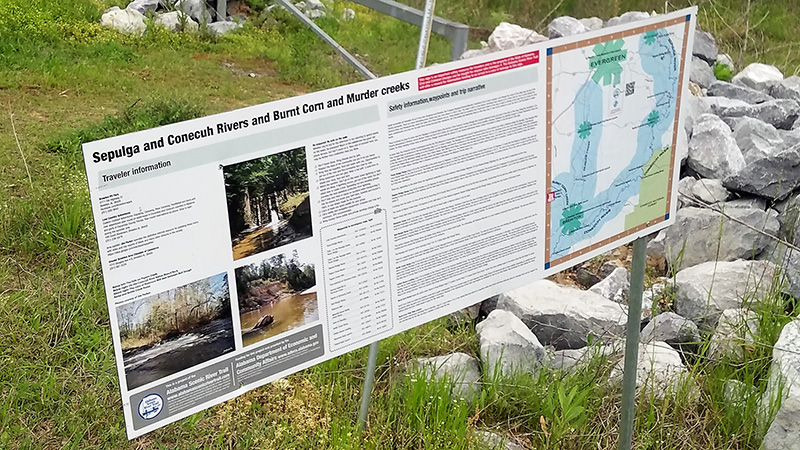 Courtesy photo Damage to the river sign on Burnt Corn Creek. A $500 reward is being offered for information leading to an arrest.

The theft of a sign at Burnt Corn Creek is being called a “burden on local tourism and a setback to safe paddling.”

A $500 reward is being offered for information leading to the arrest of those involved in removing the metal sign next to the waterway on Ala. Hwy. 41 at mile marker No. 10.

The Alabama Scenic River Trail is a nonprofit association that has developed an extensive network of likeminded recreational paddling enthusiasts. Trail staff and volunteers have managed to build out one of the nation’s premier water trails in the 10 years of its existence here along Alabama’s more than 5,300 miles of paddleable waterways.

“Most of the time, everything goes right, but not always,” said Fred Couch, river trail founder and president. “We just had our first setback on our sign program. We placed over 200 of our safety signs, designed to give paddlers the knowledge of an area they need before embarking, and the Burnt Corn sign has been torn from its installation.”

Couch said the vandalized sign was paid for through the Alabama Department of Recreation and Community Affairs, “so the money is actually coming out of your pocket.”

“If this is what people are doing for fun, then they need to find some other kind of fun that doesn’t rob the public and endanger people’s lives,” Couch said.

The damage occurred over spring break and then again between the morning of April 7 and 8.

“There are plans to replace it, but at $600 installed cost per sign, that gets to be expensive and comes out of funding that could be used for other important projects,” he said.

Anyone with information is asked to contact one’s local law enforcement agency.